Music Midtown is one of the biggest music festivals in the South-Eastern portion of the United States. Held in Atlanta, Georgia, Music Midtown has the tagline: Atlanta’s Music Festival. This festival has become very popular lately because of the big-name bands that are always attracted to it.

If you’re thinking about grabbing tickets to the latest Music Midtown festival, we are here for you. Not only will we tell you the things you need to know about the event here, but we’ll also let you know how to get tickets and give you a few tips for enjoying yourself.

There were no events found for music midtown.

Music Midtown was first held in 1994 and ran yearly up until 2005. There was no festival held starting in 2006 because of the large cost of the festival, but it returned in 2011 and has been held yearly since. This event has had much better attendance ever since. In 2012, it became a two-day festival. Right now, the event is held in September. 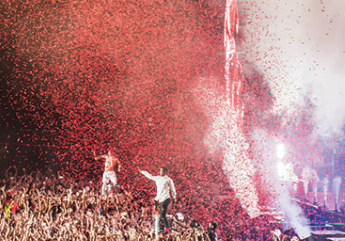 Bands like Coldplay, Pearl Jam, Cage the Elephant, Journey, Jane’s Addiction, Weezer, Kendrick Lamar, and Third Eye Blind have all played at Music Midtown over the last several years. The most current lineup looks like it will be equal to, or better than some of the band lineups of the past. This festival, since its resurrection, has been growing steadily in popularity. If you want tickets to Music Midtown, you will need to move fast once they go on sale.

Passes for this event are always hot items. They can be bought directly from the festival’s homepage, and they can be purchased for either the whole weekend or for one day of the show. Different tiers of prices exist, depending on what kind of experience you are looking for.

But most of us don’t want to spend too much on tickets. If you’re looking for cheap tickets to Music Midtown, you will either need to buy them as soon as they go on sale or time your purchase through a third party ticket site like SeatGeek well. If you’re going to go through a ticket site, your timing will determine what you pay. Prices are set by supply and demand, so the trick is to buy your passes when supply is high and demand is low. We’ve found that this is typically around a month after the original wave of tickets sells out. If the price doesn’t matter, feel free to check out tickets whenever you want. Just remember that prices may increase as it gets closer to the day of the event because of the popularity of this event.

Music Midtown does not allow camping on their grounds. If you’re going to stay for more than one day at the festival and you’re from out of town, you will need to get a hotel room for the night. W Atlanta-Midtown is the preferred hotel by the people who run this music festival, but it’s certainly not the only choice that you have. We also highly recommend the Georgian Terrace, Hotel Indigo Atlanta Midtown, and Hyatt Atlanta Midtown. If you need accommodations while you’re at Music Midtown, be sure to take care of these well in advance. It’s always better to be prepared early so that you can have a good time and not worry about the little things while you’re there.

If you’re going to Music Midtown, be sure to experience the food. Atlanta is famous for its cuisine, and there will be plenty of food present here. Plan accordingly and bring some spare cash so that you can experience all that this festival has to offer.