The Rogers Cup is one of the biggest professional tennis tournaments to be held in Canada, attracting some of the best athletes in the world. It’s one of the most exciting tennis tournaments to watch on television, and it’s even better live and in person. If you’ve always wanted to see a professional tournament, this is a great place to start. If you’ve been to many but want to learn more about how to enjoy yourself and maybe even save a few bucks here and there, we can help you out with that, too.

Keep reading to learn more about the Rogers Cup and how to get tickets!

About the Rogers Cup

The Rogers Cup, or as it’s often referred to as, the Canadian Open, is one of the most prestigious tennis tournaments in Canada. It alternates its location each year between Toronto and Montreal. For men, the even-numbered years are held in Toronto, while the odd-numbered years are hosted in Montreal. For the women’s competition, it’s the exact opposite—while the men play in Toronto, the women are in Montreal. The tournaments are held at the same time. Both cities have great tennis facilities and attract thousands of fans on a daily basis while things are underway. In Toronto, the tournament is held at the Aviva Centre. In Montreal, it’s held at IGA Stadium.

There were no events found for rogers cup.

The Rogers Cup is part of the WTA and ATP World Tour, making it one of the highlights of the tennis season. If you’ve always wanted to check out a professional tennis tournament but haven’t yet, this is a good place to start, especially if you’re located in Eastern Canada. It’s one of the premier pro events, and it’s a lot of fun.

And if you are a seasoned tournament-goer, don’t worry. We’ve got some tips for you down below on how you can have an even better time when the next Rogers Cup rolls around.

IGA Stadium can hold just about 12,000 people on its center court, making it one of the most widely used tennis stadiums in Canada. It’s the ability to hold a large crowd also makes it one of the most popular venues for enjoying the sport. There are 12 courts total here, making it ideal for a big event like the Rogers Cup.

All of the seats at IGA Stadium are pretty good, but like any other venue, some are better than others.

The Aviva Centre is located right in Toronto and has a seating capacity of 12,500 at the Stadium Court, the biggest tennis court within the venue. There are 11 other courts besides the main one, but these courts do not have the same capacity as the main court. It’s one of the nicest stadiums, tennis or otherwise, in North America.

The Aviva Centre is a little bit bigger than IGA Stadium, but there are still many great seats. It has a great seating structure, including several suites. Center court seats are ideal, but you won’t be disappointed anywhere in the main stadium.

Getting Good Seats on a Budget

Regardless of where you’re going to watch the Rogers Cup and which city you’re located in, there are a few easy to follow tips that you’ll want to keep in mind to make sure that you don’t break the bank getting to the tournament. 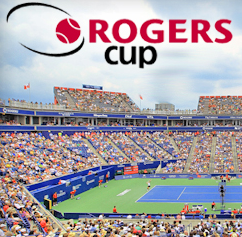 Start early. The sooner you start your ticket search, the better the chances you will get exactly the tickets that you want—and that you won’t break the bank trying to get them. Some people believe that waiting until the last minute will help them to save money, and sometimes, they’re right. There’s always a chance that someone who bought tickets a while ago no longer can use them and just wants to get rid of them at a fraction of what they paid. This does happen from time to time, but the odds of stumbling across a situation like this at a hugely popular event like the Rogers Cup is pretty slim. Start your search early and you’re more likely to come across good deals and be able to recognize a deal when you see one.

Think about parking. Parking is one of those things that most people don’t think about until they get in line and are waiting for the lot attendant to get to them. Parking is always a pain, but it can be a lot less of one if you plan ahead.

Don’t worry about the main stadium. Main stadium seats are awesome, and if you are looking for a great time, this is worth the money. It doesn’t matter if you’re at IGA Stadium, the Aviva Centre, or anywhere else, for that matter, center court seats in the main stadium are always awesome. But, if you want to save some money, there are other places that you can sit. Each of these venues has 12 courts total, and 11 of them are outside of the main stadium. You can still watch world-class tennis at any of these courts, and the tickets are much cheaper than they are for the main stadium. If you want to get into the event but don’t want to break the bank, this is one of the best ways to go. Regardless of where you sit, you’re still going to see amazing tennis. You might even see the eventual champion. While the top-ranked players get seeded in the main stadium, the top-ranked athletes don’t always win. You can sit anywhere and still see top tiered athletes.

The Rogers Cup is one of the most popular tennis events in all of Canada. Some of the best players in the world come here, along with some athletes you may never have heard of. Getting to the tournament should definitely be a high priority if you’re a tennis fan. And if you’ve been there, hopefully, these money-saving tips will help you to have even more fun when you go next. The Rogers Cup is one of the biggest tournaments on the World Tour for a reason, so be sure to get your tickets as soon as you can.