The Citi Open is one of the bigger tennis tournaments held in the United States each year. It brings forth some of the best competitors in the world, and it’s one of the most exciting sporting events to watch as a spectator. Seeing it live and in-person is even more exciting.

Here, we’ll talk about getting to the Citi Open, getting decent tickets at a good price, and enjoying yourself while you’re there. Whether this is your first tennis tournament, or you’re a seasoned veteran, we can help you to make the most out of this experience.

The Citi Open used to be called the Washington Open, but it is currently referred to as the Citi Open because Citi is the major sponsor of the event. It’s held each year in Washington, D.C., and is held on an outdoor, hard court.

There were no events found for the citi open. 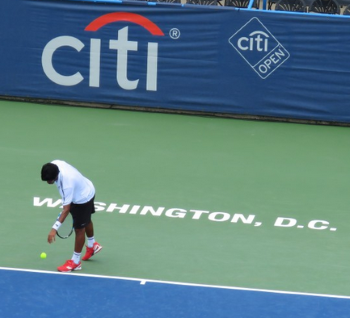 It was first held in 1969 and has easily become one of the most popular of the WTA events in the U.S. It’s also a part of the ATP World Tour 500. For several years it was not a part of the U.S. Open series, but as of the 2019 edition, it was back on the tour. It remains an incredibly exciting event, attracting some of the best tennis players from all over the world.

The Citi Open doesn’t get the same kind of press coverage that the U.S. Open gets, but it’s just as popular amongst the diehard tennis fans. This can make getting seats to watch a portion of the tournament a little bit more difficult than some might expect, but that doesn’t make it impossible. If you’re looking for info on how to get decent seats to the Citi Open, you’ve come to the right place.

The Citi Open is held at the William H. G. FitzGerald Center, right in Washington, D. C. The FitzGerald Center consists of 15 hard courts and 10 clay courts. It can host about 7,500 people, creating an intimate and exciting venue to watch a tournament in.

With that said, the limited number of seats at the FitzGerald Center helps to create a higher than average demand. While some stadiums have up over 10,000 seats available for any given tournament, that’s not the case here. When a big tournament like the Citi Open comes here, it is almost always a sell-out crowd. That means tickets go quickly, and it means that if you want good seats, it’s going to be even tougher to do. Luckily, there are a few tips for you to follow here to gain a little advantage over the crowd.

Getting Good Seats on a Budget

Making sure that you get good seats should be a priority if you’re headed out to the Citi Open, but that doesn’t mean that you need to go broke doing so. Getting good seats without paying too much is possible, but it can sometimes take a little bit of extra effort. Even then, there’s no guarantee that it will work out every time for you. Still, here are a few tips to get to the Citi Open and have a good time without breaking the bank in the process.

Start early. The sooner you start looking for tickets, the better your chances of finding exactly the seats you’re looking for will be. Additionally, it will give you a better idea of prices and help you to easily identify when coming across a good deal.

Don’t search in one spot. The best place to start is always with the venue. Head over to the official Citi Open website and search through their ticket sales page. Odds are, you will find some tickets, but maybe not everything you were looking for. While this is typically the best place to start, it’s not the only resource available to you. Third-party ticket sites can also be of a huge benefit to those looking for tickets. If you’ve found that the tickets you want have already been sold on the primary market, there’s still hope. People purchase tickets all the time, and then later find out that they can’t make it to the game. Use this to your advantage and make sure you get exactly the seats you were hoping for.

Buy tickets early in the tournament. Everyone wants to see the championship round, but unfortunately, these are going to be the most expensive tickets of the entire Citi Open. If you head out to the early rounds of the tourney, you’re going to spend a lot less money. And the quality of the matches you see will not be any less. Don’t forget that this is world-class tennis that we’re talking about. Even if you go on day one, you’re still going to see some of the best athletes in the world compete against one another.

If you’re driving to the tournament, then you’re going to need to find a place to leave your vehicle. Leaving it at the hotel is usually the best way to go if you don’t mind relying on public transportation, but that’s not for everyone. If you’re going to drive right to the FitzGerald Center, then you’ll need to have a parking place. Purchase a parking pass online, and you won’t have to worry about finding a spot at all. If you buy a Lot A pass, your spot is guaranteed, regardless of how late you arrive at the tournament. It might seem like a small thing but taking care of these details will save you a lot of trouble just in case.

Tennis is one of the most enjoyable sports to watch. It’s fast-paced, requires a lot of athletic talent, and pure sport. If you’ve never been to the Citi Open, it’s an awesome place to enjoy the sport of tennis. With world-class athletes, an awesome venue, and a great location, it’s one of the most popular tennis tournaments in the world for a reason.