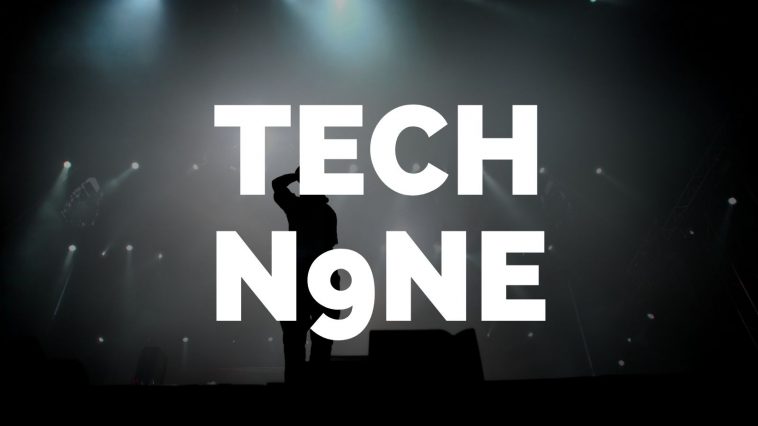 Tech N9ne is indie rap superstar Aaron Dontez Yates. He was born in Kansas City, Missouri where he first used rap music as a tool for learning to read and do mathematics. As he grew up, his love for all types of music and a unique interest in horror and ghosts helped him cope with his mother’s struggle with lupus. His two forms of escapism have become significant influences in his own music writing. When he became an artist he joined groups like Black Mafia, 57th Street Rogue Dog Villains, Nnutthowze, and the Regime. The name Tech N9ne was given to him for his fast “machine gun-like” style. This is the best time to buy Tech N9ne tickets. Don’t miss out on special deals when you see them available.

There were no events found for Tech N9ne.

Tech originally signed with Quincy Jones’ label Qwest, but he released his debut album, The Calm Before the Storm, with Midwestside Records. Just a couple of years later, in 2001, Tech N9ne released Anghellic under his own sublabel Strange Music. The artist has always been popular in the underground rap scene. He spread the word about his music primarily through touring and a memorable over-the-top stage presence. Tech N9ne is known for his performance skills as well as his production prowess. He has worked with Krizz Kaliko, Kutt Calhoun, Korn’s Jonathan Davis, Boyz II Men, and Gary Clark Jr.

Tech N9ne has long been a favorite live performer among rap music fans. His dark childhood influences inspire his stage imagery and his memorable stage presence. As an indie artist, he has performed in many smaller venues, but he has also performed in larger shows and at festivals. He appeared at the Rock The Bells 2009 Festival and the tenth annual Gathering of the Juggalos. On many of his tours, he invites other artists to join him. Tech’s Independent Grind tour in 2014 included Freddie Gibbs, Krizz Kaliko, and Jarren Benton. His Special Effects tour was joined by Kaliko, Murs, Chris Webby, Zuse, and King 810.

Where to Find Tech N9ne Tickets

For an artist known to be so indie and underground, Tech N9ne performs often all over the world. He plays in small venues and large theaters or music halls. Nonetheless, tickets to see Tech N9ne in concert are constantly in high demand. Additionally, he performs in only a handful of the world’s biggest cities. Check above to find your tickets. For the best deals on tickets, be sure to check regularly. Luckily, tickets to see Tech N9ne perform are generally affordable.

Very few indie rappers gain the following Tech N9ne has. He has earned respect from music fans and musical artists alike despite primarily pioneering his own career path. It was only a couple of years after the debut of his first album that Tech founded his own record label. He has produced music with many other rappers, but he has also ventured out to work with musicians from unlikely genres. Tech has worked with B.o.B., the Doors, Kendrick Lamar, and Serj Tankian. Therefore, it’s not surprising that he has listed Jim Morrison, Led Zeppelin, Elton John, and Metallica as major influences in his writing. The horror hardcore rapper has a standalone niche in the modern music industry.

Tech N9ne has also had his music featured in film, television, and video games. He has had songs featured in movies like Born 2 Race, Alpha Dog, and The Life of Lucky Cucumber. His song “Let’s Go” was used in a promotional short film for Axe body spray. On TV, his music has made appearances on Dark Angel, My Super Sweet 16, The Hills, and Warren the Ape. Several of Tech’s songs are in the video games Madden NFL 2006, The Crew, and Midnight Club: Los Angeles. He has also appeared as an actor in the movies Vengeance and Night of the Living Dead: Origins 3D and in the musical “Alleluia: The Devil’s Carnival.”

Unfamiliar music lovers may fail to realize the place Aaron Yates, known as Tech N9ne, has in the broader music industry. His unique but intense style and horror influence create a lasting impression on audiences. When you go to his concerts you are likely to be impressed, and you are likely to be gifted with a guest appearance by another well-loved artist. He has the respect of his peers across the genres, and his music is a treat to fans of all genres. Don’t miss your chance to see Tech N9ne live at a show nearest you. Get the best Tech N9ne tickets available right now. You have a chance to get some of the best seats available.