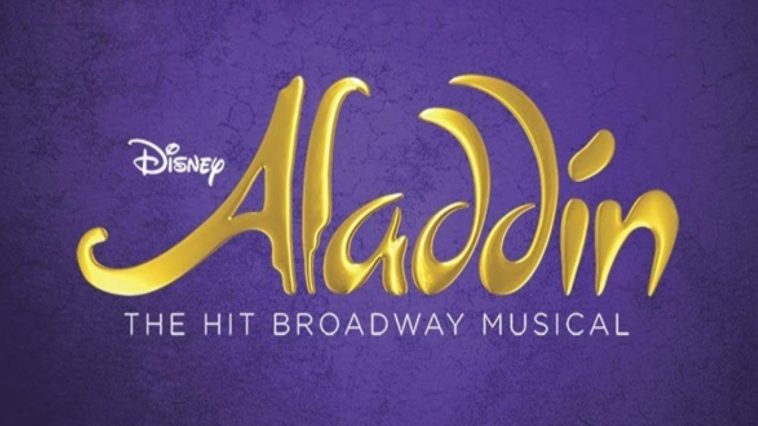 Aladdin is a non-stop thrill ride theater production debuting in 2011 and based on the 1992 eponymous Disney animated film. The film was itself originally based on one of the stories from the early eighteenth-century book of stories, One Thousand and One Nights. Aladdin the street scamp and his magical genie have been entertaining us for generations, and the latest, theater-formatted production just might be the best version yet! Before we continue we want to share some ticket listings for upcoming shows in NYC and on tour. There are plenty of great seats available so be ready to act.

Following the storyline of the beloved film, the adventures of Aladdin begin in the city of Agrabah where Aladdin, a sticky-fingered street youth is unhappy with his life. He accidentally meets Princess Jasmine while she is disguised, exploring life outside the palace and trying to avoid her father, the Sultan, decree that she must marry a rich suitor within three days.

Just in time to help him win Jasmine’s heart, Aladdin finds a magic genie who grants him three wishes. Will Aladdin be able to use them to be with his love and raise himself out of his life on the streets? Will a plot to overthrow the throne by the palace’s evil Grand Vizier, Jafar, succeed? Will Aladdin be able to achieve his goals without losing the best parts of himself? You’ll have to watch and see!

Experience the excitement, romance, and adventure of Aladdin by purchasing cheap tickets using the listings above. You’ll be amazed by how many tickets are still available.

The show first premiered at the 5th Avenue Playhouse in Seattle, Washington in 2011. It made it to Broadway three years later where James Monroe Iglehart (Genie) and Courtney Reed (Jasmine) received awards for best performances. Many reviews pointed to Iglehart’s performance of the classic song, “Friend Like Me” as the highlight of the show and a moment of pure delight. The show has gone on to be performed and won awards in England and Australia as well.

Reviews from critics highlight the non-stop visual effects and excitement. Sword fights, glittery costumes, “eye-popping sets”, and “spirited choreography” (Entertainment Weekly) keep audience members – the younger, the better – on the edge of their seats for the whole show. The flying magic carpet scene is a wonderfully executed special effect that will make viewers gasp with delight. The New York Times also enjoyed the visual richness of the performance and said, “Aladdin has an infectious and only mildly syrupy spirit. Not to mention enough baubles, bangles, and beading to keep a whole season of RuPaul’s Drag Race contestants in runway attire.”

Variations From the Film

For those who think the Disney film, Aladdin, was absolutely perfect, rest assured that there are few differences between it and the musical. The minor variations include replacing the film’s character of Abu with three friends: Omar, Kassim, and Babkak. These kooky guys bring just as much fun and support to Aladdin as you would want him to have. The musical also incorporates the songs from the film as well as seven new songs! Three of these were written for the film but ultimately left out, and the rest are brand new. You get everything you love, and then some!

Come take an enchanting, hilarious, and romantic carpet ride with the cast of Aladdin the musical. It has all the magic of the story you already love but brought to life with even more wonder and thrills for you to experience up close and personal in a live theater production. The best time to buy Aladdin tickets is now and do yourself a favor by buying the best seats available for the date you want to attend.