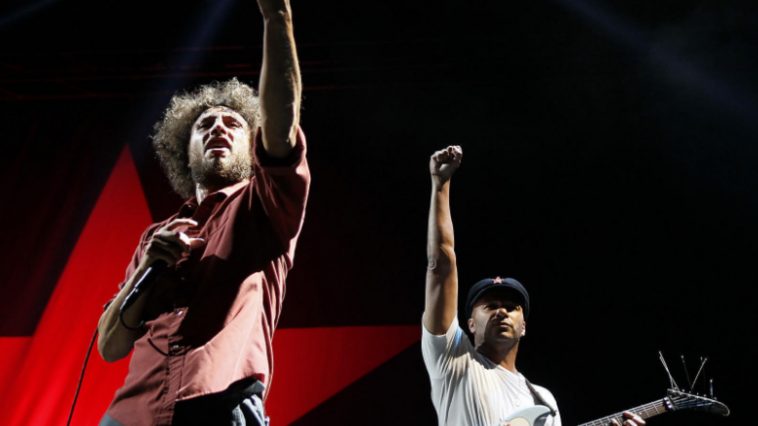 Rage Against The Machine announced they will reunite for a series of shows in 2020. So far they confirmed a two-performance presence at “Coachella” festival on 10th and 17th of April in Indio, California and three other shows in El Paso (Texas), Las Cruces (New Mexico) and Phoenix (Arizona). More dates are expected to be added to this tour.

This reunion will be the first since the band’s last performance together from 2011 when they played at “Los Angeles Coliseum”. With no album released since the 2000 “Renegades”, fans all over the world have long awaited for new material and a reunion.

Rage Against The Machine was founded at the beginning of the ‘90s by musicians who performed in other bands: Zack de la Rocha – vocals – played with “Farside”, “Headstance” and “Inside Out”, Brad Wilk – drums – played with Eddie Vedder (“Pearl Jam”) and Tom Morello – guitar – played with “Lock Up”. The trio was joined by Tim Bob, a childhood friend of Zack de la Rocha, who played the bass.

There were no events found for Rage Against The Machine.

The group issued in 1992 the cassette “Rage Against The Machine” which featured among its 12 songs the title “Bullet in the Head”. The track became a hit in 1993 when it was re-issued as a single.

The cassette drew the attention of a few music labels and brought the band a contract with a large record company. This determined detractors to accuse them of hypocrisy and to question the authenticity of their musical protest. By signing a deal with a company related to one of the greatest corporations in the music industry, they accepted to work with the exact kind of corporation they criticized in their music. However, these critics failed to deter the band from its path and the self-titled official debut album was released in November 1992. The album received platinum certification three times for sales exceeding three million copies and reached #45 in “Billboard 200”.

The band became more engaged politically by declaring their support for groups such as “Rock for Choice”, “FAIR” (“Fairness and Accuracy in Reporting”) and “Refuse & Resist” and spent around 4 years involved in various supporting activities.

In 1996 they released the album “Evil Empire” which reached # 1 in “Billboard 200 and received three platinum certifications. The album was a success also in UK, where it reached #2 in the charts. The single “Bulls on Parade” became a hit, also reaching #1 in some of the US charts. A year later, in 1997, RATM released its first video, which reached Number 2 in “Billboard Music Video Sales” chart. They also performed a summer tour alongside “Wu-Tang Clan”.

Two years later, in 1999, they manifested again their support for left causes by performing a controversial benefit concert for inmate Mumia Abu-Jamal, who was sentenced to death for the murder of a police officer in 1981. Mumia Abu-Jamal, a journalist, and political activist became largely known for his writings about the American criminal justice systems, writings issued while on death row. In 2001 his sentence was commuted from death to life imprisonment without parole.

Aside from their political activities, the band found time also to release new material in 1999: “The Battle of Los Angeles”, which debuted at Number One in “Billboard 200” and received double-platinum certification the following year.

2000 proved to be an eventful year for RATM: the band performed outside the “Democratic National Convention” in August and the clash between the police and the participants resulted in 6 people arrested and several injured. In September, a new incident brought the band into the spotlight, when during the “2000 MTV Video Music Awards” ceremony, Tim Commerford was arrested after climbing a fake tree and refusing to come down. This latter incident is believed by most to be the reason for which Zack de la Rocha decided to quit the band. He announced the same year that he had plans for a solo project and in October he left the group. The remaining members announced they will continue performing with a new vocalist and Zack began working on his solo album.

In December 2000, the last album of the band was released. “Renegades” featured covers of various artists such as “Rolling Stones”, Devo, Bruce Springsteen, EPMD.

Tom Morello, Brad Wilk, and Tim Bob formed alongside Chris Cornell the group “Audioslave”, which released a self-titled album in 2002. In 2003, the concert album “Live at the Grand Olympic Auditorium” was released on DVD and CD around Christmas time.

The first reunion of the band came in 2007 when they played together at “Coachella” festival. Over the next year, the band performed few shows at various festivals from U.S. and Europe. 2008 also saw the release of material from Zack de la Rocha, who collaborated with Jon Theodore in the band “One Day as a Lion”.

In 2009, Rage Against The Machine initiated an Internet campaign meant to bring “Killing in the Name” at the top of UK charts, all with the purpose of preventing an “X Factor” winner to reach that first position. In celebration of the campaign’s success, the band offered fans a free concert in 2010.

Over the next years, previous projects were reissued: the band’s debut album benefited from a deluxe edition in 2013 and the free concert from 2010 was released in a CD/DVD set in 2015.

In 2016, Morello, Commerford and Wilk founded the group “Prophets of Rage” alongside Chuck D from “Public Enemy” and B Real from “Cypress Hill”.

Taking into account the member’s deep involvement in political causes, many believe the coming performances of RATM are not a coincidence, since they are scheduled to be held eight months before the next year’s elections.

If you want to see this acclaimed, controversial band perform live and reunited and stay updated on the dates that will be added. You can check out one of the best ticket sites out there.