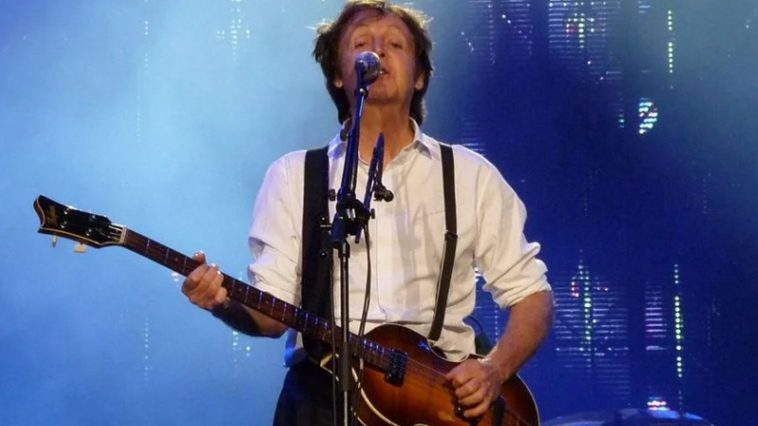 In support of his coming album “Egypt Station”, Paul McCartney has announced he will hit the road with the “Freshen Up” live tour. The tour is really an ambitious one, as is set to include performances not only in the US and Canada but also in Europe and Japan. American fans can see McCartney live this year in October at the “Austin City Limits” Festival and next year in the five locations announced so far: Raleigh, NC, Greenville, S.C., Lexington, KY, Madison, WI and Moline, IL.

There were no events found for Paul McCartney.

You can see the full list of American dates and venues of the tour at the end of this article.

Tickets for the “Freshen Up” tour have been released for general sale on the 07th of September and you can get yours most the major ticket sites.

“Egypt Station” is Paul McCartney’s seventeenth solo album and has been produced by Greg Kurstin (songwriter and producer for names like Sia, Adele, Liam Gallagher, and Beck). Invited at the “The Howard Stern” show on 05th of September, McCartney said the title of his album was inspired by one of his paintings, which contained Egypt related stuff, as he likes Egyptian writing. About his first album in five years, the musician said in a press release: “I liked the words ‘Egypt Station.’ It reminded me of the ‘album’ albums we used to make. ‘Egypt Station’ starts off at the station on the first song and then each song is like a different station. So it gave us some idea to base all the songs around that. I think of it as a dream location that the music emanates from.”

The 57 minutes album contains 16 tracks, out of which 15 have been written by McCartney, who uses a single co-author for his new material. McCartney is a real orchestra man, as throughout the album he shows his skills in using not only the piano and the bass, but also the harmonica, drums, congas, acoustic and electric guitar, triangle, harpsichord, bongos, synth, harmonium, and tom-toms. But “Egypt Station” is not a one-man-band show, as the album counts on the contribution of a choir, an orchestra, McCartney’s touring band and on the performance of “Muscle Shoals Horns”. “Egypt Station” is a glamorous display of musical styles, genres, and themes, as the ex-Beatles member mixes in it pop with rock and folk, singing with talking, offering its fans thoughts about sex and thoughts about Trump, all put in the frame of songs that are actual today and songs that would have been actual 100 years ago.

So far, McCartney released three singles from his new album: “I Don’t Know”, “Come on to Me” and “Fuh You”. “I Don’t Know” is played in McCartney’s unique style – elegant, without struggle, contemplating vulnerability with the help of the piano the musician likes so much. His ragged, completely matured voice brings an extra flavor to the song, just like an old wine that grew better with the passing of years.

“Come On To Me”, on the other hand, is a massive display of McCartney’s robust rock voice, showing that he still has it. With a wordless refrain and the use of a mid-tempo piano combined with a guitar jam, “Come On To Me” track brought Sir Paul his first presence since 1997 in the Top 10 of   Billboard’s “Adult Alternative Songs airplay chart”. Moreover, the track has already collected 31 million views on YouTube.

The rock-solid “Fuh You” has been co-written by Ryan Tedder (co-author of Beyonce’s “Halo”), “People Want Peace” is a political track that sounds like an anthem, while “Do It Now” and “Hand In Hand” display how much joy McCartney can take in playing the keyboards.

The album “Egypt Station” is a wistful display of how a musician can have fun while making music that will delight millions of fans. No matter the instrument he plays or the theme he approaches, Sir Paul McCartney delivers his public perfectly paced songs, which shows that he still has the inspiration and the magic to create unforgettable music.

Born on 18th of June 1942 in Liverpool, England, James Paul McCartney lost his mother to breast cancer when he was 14. At a church festival, the teenage Paul met John Lennon, who also lost his mother at a young age and that was the element that primarily made the two boys bond. John invited Paul to join his band called “Quarrymen” and after few years, they changed the band’s name into “The Beatles”. McCartney wrote in collaboration with Lennon the band’s first single called “Love Me Do” and released in 1962. The single was a huge hit and turned the band into a musical sensation. Three years later, in 1965, the album “Help!” brought fans the single “Yesterday”, written by McCartney, which has more than 2,200 cover versions. It was McCartney who came up with the idea of the “Sgt. Pepper’s Lonely Hearts Club Band” album, which also proved to be a huge success: it won 4 Grammy Awards in 1968 and spent 27 weeks at the peak of the UK’s album charts.

However, the amazing success and popularity didn’t prevent disagreements and strained relations inside the band. In a cold January morning of 1969, at “London’s Twickenham Film Studios”, the members of “The Beatles” were in the company of the last men they wanted: themselves. They had tried for several days to write and rehearse new materials for an upcoming live show, but things were not going in the right direction. The only one who seemed to understand the urgency of what was going on was Paul: “I don’t see why any of you if you’re not interested, got yourselves into this,” he said to the other Beatles. “What’s it for? It can’t be for the money. Why are you here? I’m here because I want to do a show, but I don’t see an awful lot of support”. John Lennon, George Harrison, and Ringo Starr looked back at McCartney with no expression on their faces. Moments later, McCartney added: “There are only two choices: we’re gonna do it or we’re not gonna do it and I want a decision. Because I’m not interested in spending my fuc…g days farting around here, while everyone makes up their mind whether they want to do it or not.

Thus Paul McCartney left the band in 1970 and released the same year his first solo studio album, called “McCartney”. The album peaked on the US Billboard 200, spent three weeks there and reached #2 in Great Britain’s charts.

The album “Band on the Run” released in 1974 became the best-selling studio album of the year in Australia and UK, it received platinum certification in the USA and is McCartney’s most successful album to date. After several albums were released, the group disbanded in 1981, due to arguments regarding salaries and royalties. One year before, in 1980, Paul had a rough time: he became a drug addict, was arrested and fined for possession of marijuana and lost his former partner, John Lennon, which was killed by a fanatic. All this took a toll on Paul’s musical achievements: despite the fact that he continued to create music, the success seemed to avoid him.

In the next decade, he released the rock album “Off the Ground”, then he started to work, alongside George Harrison and Ringo Starr, on the TV documentary series “The Beatles Anthology”, on the book and the musical albums focusing on the history of “The Beatles”.

Paul McCartney has been knighted in 1997 by Queen Elizabeth II for services to music, received in 2010 the “Gershwin Prize” for his contributions to popular music and was awarded in 2012 the

Paul has been involved in charitable causes from the first years of his solo career: in December 1979, he organized the series of concerts for the people of Kampuchea, which were real musical super-productions designed to support the victims of the war that took place in Cambodia between 1975 and 1979, during the regime of the leader Khmer Rouge.

In order to support the victims of the war, a war in which around 3 million people lost their lives, McCartney gathered 3 generations of musicians: the “old” one, represented by him and the “Wings”, alongside “Procol Harum” and “The Who”, the “middle generation”, meaning “Queen” and some members of “Led Zeppelin” and the “new generation”, with names like “The Pretenders” and “The Clash”.

This great event was not the last charitable cause in which Sir Paul McCartney got involved: after the 9/11 tragedy, he organized and performed at “The Concert for New York City”. The concert honored the first responders from the police and the fire department of New York, their families, as well as those who lost their lives in the terrible attacks. Important names of the music industry, such as “Bon Jovi”, “The Who”, Elton John, David Bowie, Mick Jagger, and Keith Richards and Eric Clapton attended the concert. Not only musicians but also actors, athletes, and some politicians joined the event, all paying tribute to the victims of the 9/11 attacks.

As for personal life, Paul married in 1969 the photographer Linda Eastman, to whom he said “goodbye” in 1998, when she lost the battle with breast cancer. The couple had three children.

In 2002, McCartney married the former model Heather Mills, which gave him a daughter. They got divorced in 2008 and three years later Paul married Nancy Shevell.

Aside from a well-known philanthropist, McCartney is a strong advocate of vegetarianism and animal rights and a fervent supporter of the fight against cancer.

With an estimated net worth of $660 million (in 2014), the 76 years old musician, philanthropist and activist don’t seem to slow down. His impact on music history, his influence on young musicians, his amazing song-writing skills, his surprising ability to play so many instruments and his energizing presence define Sir Paul McCartney as a legend of music.

Here is the full list of Canada and American dates and venues of the “Freshen Up” tour: Tickets at StubHub are available.