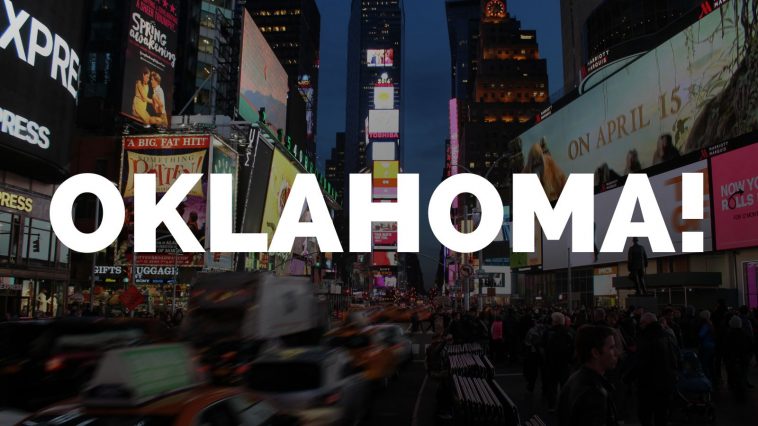 Oklahoma! is one of the most popular and beloved musicals of all time. The hootin’ hollerin’ good time takes place in – you guessed it – Oklahoma when it was still considered “Indian Territory”. It centers on a small group of townsfolk falling in and out of love leading up to a much-anticipated town dance. Laurey is torn between her feelings for a sweet boy named Curly and a brooding farmhand named Jud. Amidst classic songs such as “The Surrey with the Fringe on Top” and “People Will Say We’re In Love”, dance numbers both beautiful and cheerful, and a host of fun local characters, you will fall in love with this story just as people have since its debut over 70 years ago in 1943. This is the best time to buy Oklahoma tickets. Don’t miss out on some of the best seats.

Experience the rollicking fun and heart-stopping drama of Oklahoma! by purchasing cheap tickets. Check back often to get the best deals and exclusive offers so you won’t miss out on the performance when it comes to town! Make sure you get the one-of-a-kind experience of seeing Oklahoma! live.

Critics can’t get enough of this rendition of the classic play. Reimagined for the modern day with cowboys and cowgirls you could imagine standing in line next to at the grocery store, New York Magazine says, “The bright golden haze on the meadow has never looked so ominous, or so theatrically exhilarating… this is Oklahoma! that was there all along!” Time Magazine called it the “#1 Theatrical Event of the Year” and the New York Times claimed, “Thrilling and audacious. This has always been a very American story, but has never felt like so much of one until now.”

These reviews combined with winning Tonys, Drama Desks, and even Pulitzer Prizes throughout the show’s many productions throughout the years combine to ensure that you will adore Oklahoma! and especially this production of it.

History of the Show

Oklahoma! is noted for being the first successful musical to have music that corresponded to and moved along the storyline. Prior to this, “musicals” were a mix of acting combined with singing and dancing that might have a variety of different themes. Rodgers and Hammerstein’s breakthrough concept with Oklahoma! – having songs about love or frustration or injustice that directly corresponded to the story of Laurey and her friends – set the stage for the next 70+ years of musicals that combine music and acting to tell stories. Playwright Thomas Hischak called it, “the single most influential work in the American musical theatre.”

After a wildly successful record-breaking five-year run on Broadway from 1943-1948, the show has been produced in the UK, in Japan, and in various revivals in the US. It even inspired the 1955 Academy-Award-winning film of the same name in 1955.

Oklahoma! performances take place in the exciting Circle in the Square Theater. Here, the graded seating that completely encircles the small stage in the center means that there are literally no bad seats and you’ll never get stuck looking at the back of someone’s head instead of the stage.

That being said, if you’re a fan of being able to stretch your legs, reserve seats in Row A. And if you’re looking for the best value for your money, reserve the Center Orchestra section, Rows H or K.

Join a small-town group of folks for the upcoming box social dance in Oklahoma! on Broadway. When young hearts are blinded by pride, fear, silliness, and a little bit of treachery, you know you’ll be in for a night of country fun and intrigue. This is your chance to get the best Oklahoma tickets. We want you to have the best seats in the venue.