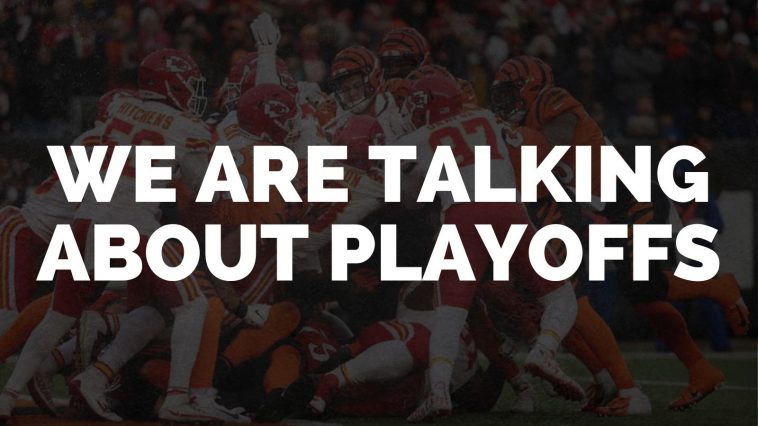 Each year we do a quick look into the NFL playoff race to see which teams will have a longer season and which ones will not. Playoff tickets are readily available for some teams while others are quite difficult to get. We will break down the teams that are moving on from each conference and how you can get tickets for some playoff fun leading up to some Super Bowl tickets.

Before we get into all of the different teams, below you will find listings of the upcoming games. Each game is subject to change based on opponent and win/loss scenarios. A deep run by a five seed could give them home field in the championship game if the right outcomes arise. If you don’t see the game you want to see, use the load more button. This will show you every possibility out there.

We will start with the American Football Conference. It seems like the cycle will continue with the Bengals, Bills, and Chiefs. Each of these teams has shown why they are the best and why they are always fighting for the top spot.

Kansas City Chiefs – One of the best football gunslingers in the NFL, Patrick Mahomes is making headlines once again heading into this playoff stretch. Look for some home-field Kansas City tickets at Arrowhead Stadium.

Buffalo Bills – Led by Josh Allen, the Bills are heading back to the playoffs with some momentum. Expectations have been high the past couple of years but they haven’t reached their goal yet. They will get a bye in the first round and control the home field. Look for Buffalo Bills tickets at Highmark Stadium.

Cincinnati Bengals – With a slow start to the season, the Bengals found a quick way to turn it around and will host another home playoff game and if not more than one. We shall see if Burrow can get it done once again. Look at the Bengals playoff tickets this year.

Jacksonville Jaguars – It hasn’t been as long as one would think, but the Jaguars are back in the playoffs for the first time since the 2017-2018 season. With several years of disarray, the Jaguars have found a groove. How far they go will be the question. You can grab Jaguars tickets here.

Los Angeles Chargers – Holding a key wild card position are the Los Angeles Chargers. This is another team that got off to a slow start but is coming in hot. They can make a big run with Herbert as their Quarterback. Look for some Chargers tickets for this year’s playoff run.

Baltimore Ravens – The Ravens will be the wild card no one is really talking about. With Lamar Jackson hurt, we don’t expect the Ravens to make a big run. Should he get healthy, all cards are on the table. Try to get Ravens tickets if you can.

In the NFC we have a lot of teams that will be battling for the 2nd if not the 3rd time this season. There are definitely some clear leaders in the conference, but that only goes so far during the wild card, divisional round, and championship round. Teams with momentum, tend to make moves right now. Who comes out on top will depend on many factors. All you can do is get the best playoff seats possible.

Philadelphia Eagles – The hottest team all season has been the Eagles. They have been sneaky good on all sides of the ball. For some reason, they are still not getting the respect they deserve. No one really knows what their playoff run will look like. Make sure you get your Eagles tickets now so if they do make their run you won’t get left out.

San Francisco 49ers – The hottest team in the NFL is the San Francisco 49ers. Even with their third-string QB, the 49ers look Super Bowl bound. If their defense can remain this strong, you will see them there. Get your 49ers tickets for some home-field playoff action.

Minnesota Vikings – This is the most overrated team in the playoffs. When you depend on a flaky QB like cousins you will get a taste of success and letdown. He’s a good player, but we don’t think a big run is in store. That being said, try to get your Vikings playoff tickets so you can save early. They’ll have a least one game.

Tampa Bay Buccaneers – Well, what else is new? Brady is back in the playoffs. You can never count the Bucs out when Brady is the QB. They will start with a home game in the playoffs and we will see where they can go from there. Be sure to get your Buccaneers tickets as soon as you can.

Dallas Cowboys – Do we have to talk about the Cowboys? Yes, they made the playoff this year and two seasons in a row. What they do with this opportunity is still a big question. They have a chance to get a home-field game, but it doesn’t look likely. You can see what Cowboys tickets are out there.

New York Giants – It’s been a long time since the Giants made it to the playoffs and this time they mean business. Look for them on the road this year, but we also don’t see a big playoff run forming. Tickets for the Giants games will be on the road.

Seattle Seahawks & Green Bay Packers – We listed both of these teams as they deserve to be together. They both need to win and they could use some help. You can get your Packers tickets here and your Seahawks tickets as well. Don’t miss these teams should they squeak in.

There you have it. A breakdown of the latest playoff race and the tickets that are available. If you want to head out to a playoff game you should take action as soon as you can. This could be a great end to the season. There are a lot of key matchups that will take place and many games that may surprise you. A home game in Jacksonville is one for the ages so don’t miss out. This is the best time to buy NFL tickets, so if it is something you’ve been meaning to do we suggest you do it. Have fun and good luck with your search.