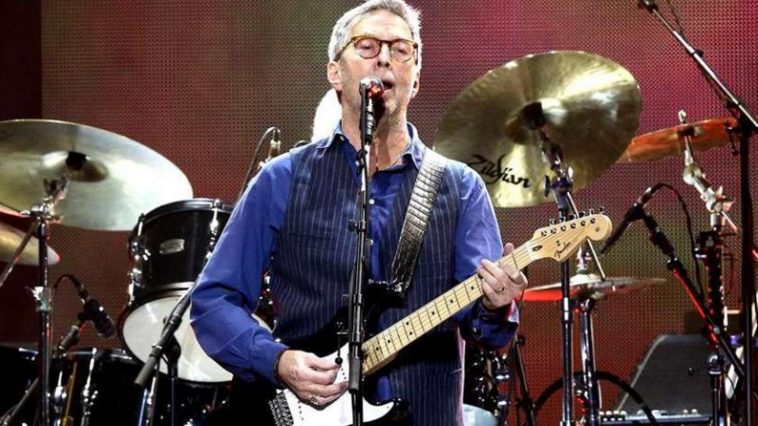 Eric Clapton was born to a musical family in Surrey, England. However, that family was not what he thought it was. His mother was 16-year-old Patricia Molly Clapton and his father was Edward Walter Fryer, who had a wife in Canada that he left Eric’s mother for before he was born. I know that was a rough intro so before we continue, the listings below will give you some of the best seats for a show near you. Don’t miss your chance to see this legend live.

There were no events found for Eric Clapton.

Patricia, known as Pat, was young and unmarried, so her parents Rose and Jack Clapp raised Eric, acting as his legal guardians until he was 18. He grew up thinking that Pat was actually his sister. It was at the age of nine when he learned the truth and it was a significant moment that profoundly affected him. The once bright and polite student stopped investing himself in his studies, becoming moody and failing important exams.

With a natural aptitude for the arts and a strong interest in rock ‘n roll, Eric asked for a guitar on his 13th birthday. Three years later, he started studying at the Kingston College of Art but was expelled for lack of progress. He had not submitted enough work because playing his guitar took priority over schoolwork. He adopted an interest in blues music, taking a liking to artists like B.B. King, Muddy Waters, and Buddy Guy. Little did he know that years later he would become one of the most successful blues artists of the 20th century, selling out arenas to thousands of fans who bought tickets to his concerts.

At 17, Eric joined his first band called The Roosters. This was followed by a short stint with the pop group Casey Jones and The Engineers. After an 18-month run with another band, Eric decided he didn’t want to play music unless it was the blues. He then partnered with Jack Bruce and Ginger Baker to form the band Cream. After touring the United States and recording three albums, Eric started to carve out his reputation as one of the best guitarists in rock music. After two years, Cream disbanded due to tension among the members.

Eric went on to join or form several more bands, battle heroin addiction, record his first self-titled studio album and eventually play a concert at London’s Rainbow Theater that became a turning point in his career. Following this musical overhaul, he released the album 461 Ocean Boulevard. By this time, he had made a name for himself as a seasoned songwriter, singer, and guitar idol. His name became synonymous with legendary rock music and the blues, placing him at the top of the “best of the best” list.

In 1992, Eric’s career reached new heights when he co-wrote the song “Tears in Heaven” with Will Jennings for the soundtrack to the film Rush. It was based on the true story of his 4-year-old son, who died after falling from a window in a New York apartment building. The song was Eric’s best-selling single in the United States and won three Grammy Awards. In total, Eric has won 18 Grammys.

He has played over 3,000 concerts in 58 countries across six continents. He has appeared at London’s Royal Albert Hall more than 200 times and has been on stage at Madison Square Garden more than 50 times.

How to Buy Tickets to Eric Clapton Shows

The best place to score Eric Clapton tickets is from the listings above, where you’ll find cheap prices, great seats, and exclusive ticket deals. Don’t miss out on seeing Eric Clapton rock like the guitar champion that he is.

Eric Clapton has an impressive record as a professional musician. A documentary based on his life, Eric Clapton: Life In 12 Bars, premiered at the Toronto Film Festival in 2017. It is available on DVD and Blu-Ray and includes an accompanying soundtrack.

While Eric retired from extensive touring when he turned 70, he hasn’t stopped making or performing music on a smaller scale for his dedicated fan base. One recent tribute to the blues hero occurred in September 2018, when he was honored with one of the first stars on the Royal Albert Hall’s Walk of Fame.

While he doesn’t have the same energy he did when he first hit the music scene, Eric Clapton is a veteran performer who knows how to connect with his blues-loving fans. Expect him to pull out his old (but celebrated) guitar tricks, his greatest hits, and a whole lot of new techniques. When you’ve been in the rock world as long as Eric Clapton has, you know a thing or two about putting on a good show. Don’t forget to check the listings above for the best ticket offers. The rest of Eric’s fans are also anxiously awaiting seats to his concerts, so snag those cheap deals while they’re hot.