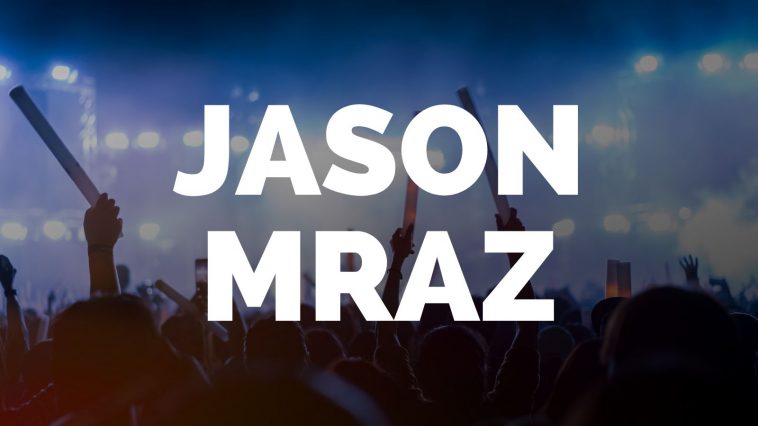 Mraz is an American singer-songwriter who was born in Mechanicsville, Virginia. He was born in 1977. His acoustic guitar-styled performances have delivered some of the most memorable singles in the 2000 and 2010s. His music feels uplifting and invites people to sing along. As a songwriter, Mraz is influenced by many different genres. This is the best time to buy Jason Mraz tickets. You have a chance to see him up close and on stage with some of the best seats.

In high school, Mraz was an artsy kid. He was a member of the cheerleading squad, school chorus, and drama club. Originally, he wanted to work in musical theater and attended the American Musical and Dramatic Academy in New York City. His friend gave Mraz a guitar and he started learning how to write his own music. Mraz became a roadie and settled in San Diego. Mraz started performing at a coffee house called Java Joe’s. This happened once a week for three years and he built up a reputation for himself slowly. He released a few independent albums in those years. In 2002, he released his first major-label debut. One of the singles on the debut reached the

In 2005, Mraz released his second album and it achieved major commercial success. The album peaked at number 5 position the Billboard 200 and sold over 100,000 copies in the USA alone. His next releases continued this trend. His third and fourth albums debuted in the top 10s of the Billboard 200. Mraz is incredibly accoladed too and has won two Grammys. He has also won two Teen Choice Awards, a People’s Choice Award and the Hal David Songwriters Hall of Fame Award. Furthermore, Mraz is an international star. His albums have been certified platinum in over 20 countries. In 2014, it was reported that Mraz had sold over 7 million albums and his songs have been downloaded 11.5 million times worldwide. He is one of the best-selling artists of all time.

Only days after his first album release, Mraz’s stage changed from a coffee shop to a large music stage and venue. Mraz played on The Late Late Show With Craig Kilborn days after his first release. In 2012, Mraz performed at President Barack Obama’s Christmas event where Obama and his family lit Christmas trees at the White House. Mraz also performed at the Kennedy Center in 2012 when Ellen Degeneres was awarded the Mark Twain Prize for American Humor. As an international star, Mraz has performed in North America, South America, Europe, Asia, Australia, the Middle East, and parts of Africa. Some famous venues Mraz has appeared at are the Mosaic Music Festival in Singapore, the O2 Arena in London, and Madison Square Garden in New York City.

Get Your Tickets Here!

Mraz is a very popular musician so you need access to the best website available to get them. You can quickly buy the tickets you want and need before they sell out. Even large venues like to release discounts when show dates approach. These cheaper tickets are limited and are sought out by many other fans.

As far as musical styles go, Mraz resembles a genre of Brazilian music that uses nylon string guitars. He creates ballads and happy music that everyone can feel a part of. Mraz’s voice is heavily coveted and many people are drawn to the luxurious sound of his singing. Listening to him perform on stage will make your body tingle. He is also influenced by soul music and jazz music. Mraz has a knack for combining genres together and creating something beautiful and unique.

Every day, Mraz seems to increase his popularity. His shows continue to sell out quickly and seats are harder to find. Make sure you buy his tickets so you can join his million fans at a live show near you.