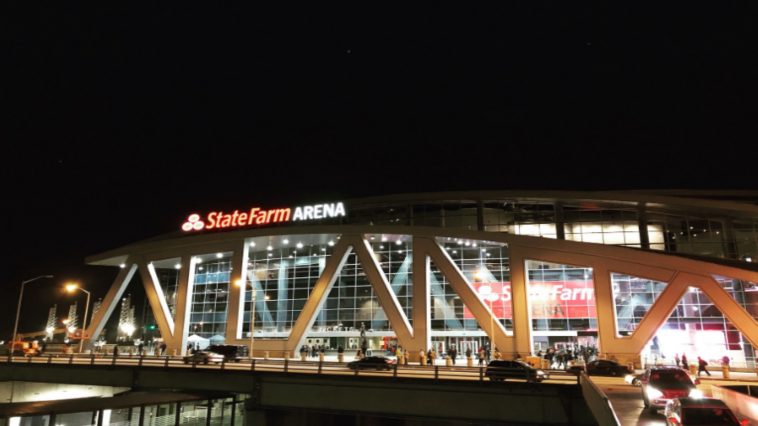 The State Farm Arena (formerly Philips Arena) is located in downtown Atlanta’s Centennial Park District. Centennial Park also held the 1996 Summer Olympic Games and a few years later, opened the doors to this 21,000 seat multi-purpose arena. The State Farm Center is the permanent home of the Atlanta Hawks and hosts everything from wrestling to the Harlem Globetrotters to some of the biggest names in show business. A lineup that has included Elton John, Justin Timberlake, Muse, and dozens of other events each year makes the State Farm Arena one of the busiest venues in the country.

Unlike other arenas, the State Farm Center makes high-quality food a focus by offering a wide variety of Atlanta staples like J.R. Crickets, Antico Pizza, and B’s Cracklin’ BBQ, so don’t worry if you forgot to eat before the event. You’re sure to find some of Atlanta’s best food inside. Aside from the food focus, the arena also features an incredible “Sensory Inclusion” room geared specifically toward guests with sensory processing needs. State Farm Arena is working hard to take the customer experience to a new level.

For most of your needs like guest services, bag check, and the nursing mother room, head to gate one.

What to Expect When You Arrive

Security Policies at the State Farm Arena: The arena recommends not bringing bags of any kind, but bags over 14”x14”x6” are prohibited and will need to be checked in at a fee. If you have to bring a bag, plan ahead and check it early with the bag valet to expedite entry. Similarly, strollers are not prohibited, but they must be checked in at gate 1. Be ready for metal detectors and bag checks at the gates, so leave yourself time to get through before the show starts!

Parking Near State Farm Arena: There are several options for parking near the State Farm Arena. The area has a few public lots, but most notably, it partnered with Parkmobile to help reserve spots ahead of time. You can also check out Parkwhiz for more parking.

Even though you have parking options, the arena also caters to and even recommends using rideshare companies like Uber and Lyft. The “Rideshare presented by Jack Daniels” area is at gate 7. On top of the rideshare option, Atlanta Public Transportation has a MARTA stop just steps away from the arena entrance. Park and ride is a great option for anyone not wanting to battle event traffic!

Whether you want General Admission floor seats or sections 1-3, you can find tickets right in front of the stage for a premium. It’s hard to argue there are better seats in the house. Just remember to bring your headphones and prepare for some sticker shock when you see the prices.

If you want a great concert experience at a fraction of the price of the floor seats, we recommend sections 112-115. The dead-on view and excellent sound quality rival the floor seats in everything but the distance to the stage. Plus, you can count on easier access to restrooms and concessions! Due to the arena size, not every seat in the house is a great seat, but there’s something for everyone’s budget.

State Farm Arena shares the area with the CNN Center, Mercedes-Benz Arena, and Centennial Park. The area is loaded with options, but you might have to walk a little bit to find the perfect one.

Less than a 10-minute walk from the arena, you can find the Food Shoppe, a low-key Creole spot with reasonable prices and delicious food. Count on quick service and a unique atmosphere before or after your event. For Cajun food near the State Farm Arena, you won’t be disappointed.

If you’re looking for pizza near State Farm Arena, Slice Downtown comes in as one of the highest-rated pizzerias in the city. Also only a 10-minute walk from the doors, Slice Downtown is an industrial-chic hotspot serving NY-Style pizza with a wide selection of craft beer and wine. It’s great for dinner before and drinks after so bring your appetite!

For an authentic German-style night out, visit Der Biergarten, which is an eight-minute walk north of the arena. This spacious beer garden and restaurant offers traditional German fare like pretzels and schnitzel. Affectionately called “Atlanta’s German Beer Garden,” Der Biergarten offers a large, outdoor space to take in the downtown scene while you enjoy a German brew.

Being in the heart of downtown Atlanta has not had the same effect on hotel prices as in other cities. 4-Star hotels with views, amenities and tasty dining options are all relatively affordable. Be sure to check for deals and consider the time of the season, but you can find a top-notch hotel within walking distance for a reasonable price. Here are our choices for the best hotels near the State Farm Arena.

Probably the priciest recommendation on the list, the Glen Hotel Autograph Collection is a 4-star boutique hotel directly across the street from the arena entrance. Come for the cozy rooms, modern décor, and vibrant art, but stay for the incredible Sky Lounge offering beautiful views of downtown and midtown Atlanta. The Glen Hotel Autograph Collection is easily summed up as “a meld of sophistication and southern charm.”

Almost directly on top of the arena, you’ll find another 4-star hotel. The Omni Atlanta Hotel at CNN Center is nestled in the middle of the State Farm Arena, College Football Hall of Fame, CNN Center, and Centennial Park and includes three restaurants, a spa, and a pool among other amenities. Depending on the time of year, you can find amazing deals at this ideally located hotel. With so much to do only steps from the door, the Omni is a great choice to turn your event night into a weekend vacation!

If you want to stay more budget-friendly, the AC Hotel by Marriott Atlanta Downtown is a sleek hotel with a modern style stashed in the middle of all the restaurants and shopping downtown Atlanta has to offer. It’s a 10-minute walk to the arena through iconic Centennial Olympic Park. The AC Hotel is perfect if you’re looking for affordable hotels near the State Farm Arena.

Other Attractions Near the State Farm Arena

The Centennial Park District is known for entertainment, dining, and shopping. Centennial Olympic Park features a 20-story Ferris wheel called SkyView Atlanta, which provides breathtaking views of the area. Across the park from the stadium, you’ll find the Georgia Aquarium, one of the biggest in the country, and the World of Coca-Cola museum if you’re in the mood for some sugary history.

State Farm Arena offers the best parts of in-arena amenities and downtown attractions. Whether you have a few hours or a few days near the arena, there’s plenty to see and do!

*Walk-ability score is based on the proximity of parking, dining, lodging, and other entertainment. State Farm Arena checks all the boxes with great options across the board all within a few steps from the entrance. The arena scores a 10/10.