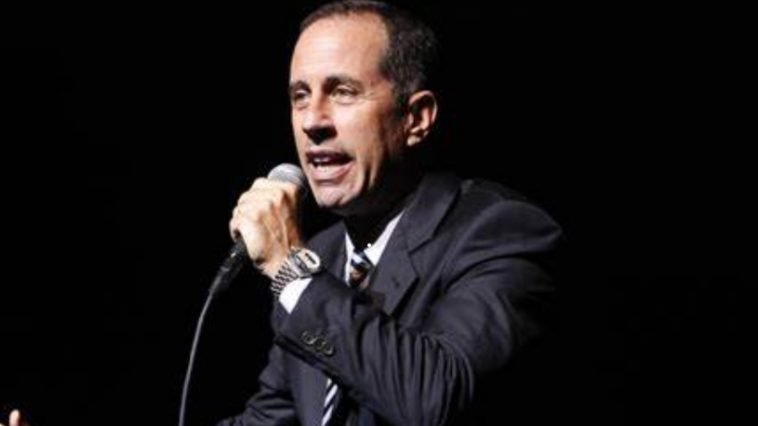 Jerry Seinfeld, one of the world’s funniest men, is still “involved” with his first love: live stand-up comedy. With an estimated fortune of $950 million, the 64-year-old actor, producer and writer don’t slow down in his determination to make laugh in live shows as many people as he can. He is currently touring with his humorous approach to modern life in various locations of North America. So if you are located in Los Angeles, Richmond, Denver, Newark, New Orleans, Las Vegas you have the chance to see Jerry’s talent to work, putting his finger on what motivates us but also on what drives us to distraction.

Married with three children and involved in several catchy projects in the past years, Seinfeld’s repertoire is full of original style notes, conclusions and questions about the everyday life hack . The next performance from his current series of live stand-up shows will take place on the 25th of October at “The Lakeland Center” in Lakeland, Florida. Up to now, his live performances extend to February 2019, when he is scheduled to appear at “Caesars Palace Hotel and Casino” in Las Vegas, Nevada.

There are plenty of venues to watch Jerry at, but the one closest to you can be found at many of the different ticket sites.

You can find the full list of dates and venues for Jerry Seinfeld’s live stand-up shows at the end of this article.

Born on 29th of April 1954 in Brooklyn, New York City, Jerome Seinfeld comes from a mother of Syrian descent and a father of Hungarian descent, both of them raised in Jewish tradition. When he was 16, Jerry spent some time in Israel, volunteering in Kibbutz Sa’ar. His taste in comedy came from his father, who worked as a sign maker and had a passion for comedy. Jerry watched a lot of TV as a child, observing the techniques used by the comedians of those times. Thanks to this intense training, he developed a unique humorous style, based on authentic, no sugar-coating comments about the mundanities of everyday life. After graduating from high school, he made his debut in stand-up comedy during an “open mic night” event. After performing in several locations around New York and getting fired from the sitcom “Benson” in 1980, Jerry appeared on “The Tonight Show” in 1981. This gave Jerry the exposure to public that he had been seeking for and turned him into a highly appreciated stand-up comedian.

His “big break” came into 1987, after starring in his own television special called “Jerry Seinfeld’s Stand-up Confidential”. Together with comedian Larry David, Seinfeld produced and co-wrote the NBC sitcom “Seinfeld” which began to be broadcasted in 1988. The plot of the show revolved around Seinfeld and his eccentric friends, presented structured stories and brought to the public’s attention apparently insignificant subjects that were actually very nerve-consuming for the main characters. The sitcom achieved immense popularity among the public and was praised also by the critics. Its influence was so high that many of the phrases used in the dialogues became part of the urban culture. In the nine seasons aired, the show won many awards, from “Emmy” to “People’s Choice” awards and “Golden Globe”. In 1998, when its final episode was aired, the sitcom was still the highest-rated show in the history of United States television. In 2009, “TV Guide” named “Seinfeld” “the greatest television show of all time” and in 2012, a “60 Minutes”/”Vanity Fair” poll identified it as “the best sitcom ever”.

Three months after the sitcom finished, HBO broadcasted a 75-minute comedy special called “I’m Telling You for the Last Time”, in which Jerry retired his act and promised to start all over, after rebuilding it. He returned at the end of the ’90s to stand-up comedy. He toured all across the US, performing in theaters and clubs and has documented that experience in 2002 when he released the movie called “Comedian”. His talent in writing was revealed by his best-seller “Seinlanguage”, published in 1993, which contained humorous observations. Ten years later, in 2003, Jerry wrote again, but this time a children’s book called “Halloween”.

In 2007, he offered the public a new project, the animation “Bee Movie”, in which he starred and also co-produced and co-wrote. Three years later, in 2010, Jerry embarked in “The Marriage Ref” reality show, which was canceled after the first season. But in 2012, the comedian found again the recipe for success: in “Comedians in Cars Getting Coffee” Jerry drives famous comedians to various eating places and interviews them over coffee. The show has always been more about the guest comedians and the driven cars than about coffee. It served as the perfect opportunity for the public to enjoy the savory dialogues Jerry had with celebrities like Chris Rock, Amy Schumer, Steve Martin, Tina Fey, Alec Baldwin, Jim Carrey, Louis C.K and even Barrack Obama. With a high sense of business and humor, Seinfeld found the perfect way to mix the two: he started to upload his reviews on Google Maps about the various eateries he visited. And the public loves this new idea, as the reviews are without a doubt, “Jerry-style”.

Before getting your Seinfeld tickets to be sure to learn about the truth when it comes to StubHub discount codes. You may be surprised.

In 2017, Jerry signed with “Netflix” a contract for the “Jerry Before Seinfeld” special. This is a series of live stand-up comedy episodes, in which Seinfeld takes once more the stage of the clubs that helped launch his career as a stand-up comedian before “Seinfeld” sitcom. In these shows, Seinfeld uses jokes he wrote since 1975, material nobody heard before and even childhood videos, all for the purpose of showing to the public the image of Jerry Seinfeld before his massive TV success.

The collaboration with “Netflix” is definitely making Jerry a very rich comedian, as the network paid at the beginning of 2018 the impressive $100 million amount for two new standup specials, plus the “Comedians in Cars Getting Coffee” series. The series was this year the subject of a meeting in court for Seinfeld. Some media sources indicated that a producer named Christian Charles had filed a lawsuit against Jerry, saying the comedian had stolen the idea of “Comedians in Cars Getting Coffee”. The producer sustained that in 2002 he presented the idea for the show to Seinfeld and he even directed a pilot episode but was not granted any ownership rights by the comedian. The lawsuit was dismissed in June this year. The attorney of Seinfeld indicated in a motion that the idea of the show was too general to justify the action in the court and that the producer sued Jerry only after he found out the amount the comedian was paid for every episode. The court’s decision left Jerry free to continue with his “Comedians in Cars Getting Coffee” project.

As for personal life, Jerry married on December 25th, 1999 Jessica Sklar, a public relations executive and they have together two sons and a daughter.

If you want to see the richest comedian in the world in full action, you can get your ticket for one or several live performances.