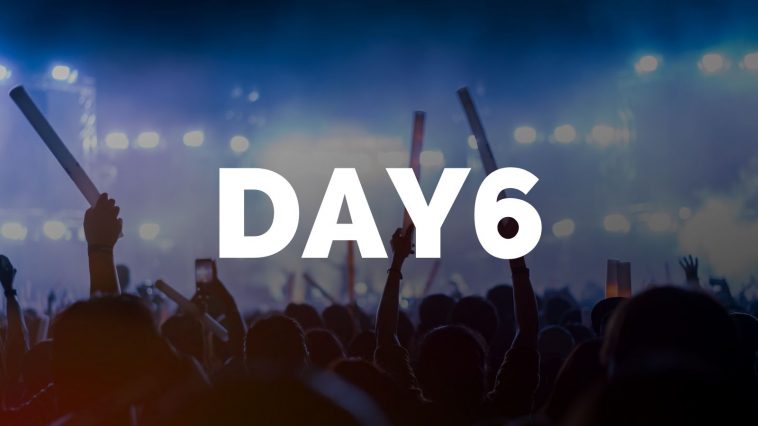 One of the hottest new K-pop boy bands, Day6 debuted with six members. They debuted in 2015 with Jae, Sungjin, Young K, Wonpil, Dowoon, and Junhyeok. Junyeok left the group in 2016. The group was formed by JYP Entertainment and has provided hit after hit since its formation. As a K-pop group, they stand out because they use instruments live and in their music videos. They have a large number of fans all over the world who are loyal. Their fans want to share their love for this amazing group with the rest of the world. This is the best time to buy Day6 concert tickets. Get the best seats in the venue closest to you. The listings below will break down what you need to know.

There were no events found for Day6.

Initially, JYP Entertainment announced a group called 5Live in 2014. The band appeared in a couple of reality shows to promote themselves. In the middle of 2015, Dowoon joined the group as a drummer and the band was renamed Day6. In the same year, they released their first EP. This was the only EP they released with Junyeok as he left early next year. In 2016, the band released another EP and made their debut on M Countdown, an important music show in South Korea that features the latest and most popular music happening.

By late 2016, Day6 had cemented itself as one of the new and upcoming K-pop groups everyone was looking out for. They boosted their popularity by announcing a monthly project. This project would see Day6 releasing two songs every month and Day 6 would perform a concert right before the release of the planned song. The project occurred throughout the year except during the summer. In fact, Day6 released their debut album in June which is why they took that break. They concluded the project with the release of their second full album in December of that year. From then, Day6 started to concentrate its efforts on becoming an international star. They made their debut in Japan in 2018 by releasing Japanese songs. They also released a greatest hits album in the same year for Japan. In 2019, the band received its first-ever music show.

Day6 has toured many different places in Korea and Japan. They started touring around the world in 2018 to make sure they can see all their fans. Their first world tour began on June 22, 2018, and ended on January 29, 2019. They visited 24 cities in Asia, Australia, America, and Europe.

Finding the best tickets to see your favorite group can prove to be challenging and stressful especially if they are coming from overseas. It can feel like if you miss this chance you will never get it again. In case you are struggling to afford these ticket prices, you can always try coming back to check on the listings. Most venues will release better deals as time passes.

If you are not a big fan of Day6, you may have only heard of the group because of JYP Entertainment’s innovative marketing strategies. Since they are a band, it makes them different from normal K-pop groups. JYP Entertainment had to use many different strategies to promote them when compared to their normal ways of promoting their K-pop groups. It feels that Day6 doesn’t fit right with pure K-pop fans and doesn’t fit right with fans of the band scene.

But to only limit Day6 to their identity does not show how talented and how hard the group works for their success. Each member is charismatic and works spends a lot of time getting better at music to create the success that Day6 has. At their concerts, you can join some of the most excited fans in the entire world. The band is quickly winning the hearts of new fans by providing fresh music in a familiar way.

This is your chance to get the best Day6 concert tickets. Look at the listings above to see if they are coming to a venue near you. Remember, to look for the best seats possible when it comes to section selection. Good luck and let us know if you have any questions along the way.