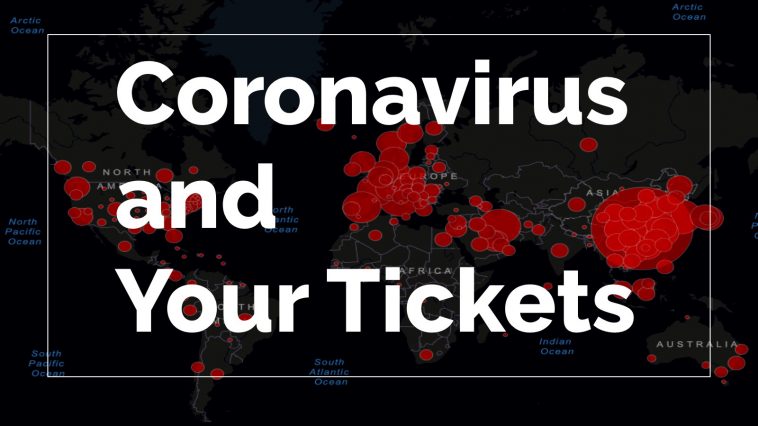 We are a site dedicated to getting the right tickets into your hands. It pains us to see what is happening around the world due to the coronavirus. Unfortunately, the entertainment industry is taking a big hit for many reasons. What will happen to your purchased tickets if the event gets postponed or canceled?

Here is what we would like to discuss with you and try to help you get a better understanding.

For the past several weeks we’ve been monitoring the situation with the coronavirus. Things have not gotten better but only worse. Last night the NBA decided to suspend the season until things improve. The NCAA March Madness tournament (March Sadness) will currently play without fans in attendance.

What does all this mean? There are several answers to this question. If an event is scheduled and postponed you will still have a ticket if the event goes on in the future. If the event gets canceled you’ll get a refund on the purchase of your ticket. If you decide not to go to a performance/game that is scheduled because of fear of the coronavirus you will not get a refund for your tickets.

The 100% moneyback guarantee that all ticket sites provide will be in full effect over the course of the next few months. Site to site we should see more refunds being released. Just remember to be patient when dealing with these ticket sites. Although their service lines are pretty extensive, there will be a huge influx of phone calls, emails, and chats. Don’t expect answers quickly but you will see results.

If you are a ticket seller that is holding on to specific tickets in the future you will most likely have to hold onto these until the event promoter decides whether to postpone or cancel the event. Selling tickets right now is going to be quite difficult since everything is up in the air. If we get through this without too much commotion things will go on according to plan this summer. As of right now, the spring touring and sports events seem very questionable.

How do You Get a Ticket Refund?

Assuming your event got canceled you can request a refund to customer support lines. In a lot of cases, sites such as SeatGeek don’t even require you to contact them to get a refund. If the event is canceled they will automatically refund your money to the credit card or payment source you used. Pretty Sweet.

What does postponement mean?

A postponed event could take place if the performer or sports team decides to make it up at a later date. There is no action needed for sites like SeatGeek and you will have to wait to hear when the new dates are set. You cannot receive a refund unless the postponed event gets canceled.

If you don’t want to go to the event

If you hold a ticket and decide you are not comfortable going to the event, you only have one real option. When it comes to your money the best option is to try to sell your tickets back on the marketplace. For example, if you bought Billie Eilish tickets for this coming spring and she decides to keep performing you can then sell your tickets for a fair price and hopefully get your money back.

Where do Ticket Sites Stand at this Time?

SeatGeek’s Stance on the Coronavirus

Currently, SeatGeek has announced the protection of all customers that purchase their tickets using their platform. You will receive a refund automatically on canceled events. They have a straightforward FAQ section on the difference between postponed events and canceled events. Remember these are two different situations.

SeatGeek will not cover travel or other fees outside of the actual ticket. If you plan on traveling to see a concert or sports game they will only cover the amount of the ticket and not the actual travel expenses that you incur.

StubHub is offering refunds on canceled events by giving you a 120% coupon into your account. This means if you spent $100 on a ticket, you will get $120 in the form of a credit on their site to be used at a later date. This is set to arrive in your account within 48 hours. If you decide not to get this coupon you can get a refund for your full order amount including fees. This will arrive between two and three weeks. Events that are not canceled and still go on will not get you a refund. You do have the option of reselling your tickets on StubHub if you are not comfortable going to the event.

Check out the StubHub FAQs about the coronavirus and determine which method you would like to use on a canceled event.

Currently, we haven’t seen anything from Vivid Seats or Ticketmaster.

Listed here are some of the major events that have been canceled or postponed for another date.

Events to be Rescheduled

We do expect a lot more events to be added to this list so come back often.

As we move forward through these troubling times we need to stay positive and hope things improve dramatically. Things will most likely get worse before they get better.

We hope this article helps you get a better understanding of how ticket sites will handle refunds on postponements and cancellations. The coronavirus is definitely here and will continue to wreak havoc on the entertainment industry. We will try to provide as much information as we can. Let us know if you have any questions about other ticket sites. Stay safe out there.

Future – Be sure to read our extensive article on Vivid Seats vs. SeatGeek vs. StubHub.