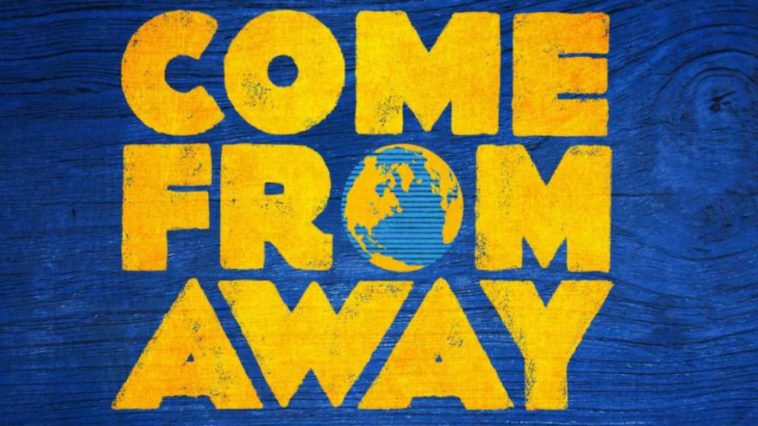 Once when a lot younger, I was traveling on a bus.  There were some school kids who were larking about a bit, but nothing too disturbing.  As we approached a stop, one from the back – a lad of about fourteen or fifteen – made his way forwards and as he passed a large lady dressed in a fur coat, she grabbed him. – A deep look into ‘Come from Away’.

Hands around his throat, she threw him onto a double seat – unfortunately, the one on which I was sitting – and began slapping him around the face.  The point is, given the unexpected, none of us quite know how we will react.

But in the face of even the most extreme evil, individuals and communities can come together to support their fellow humans, and that is the story of ‘Come from Away’.  The term is the name given by the locals of Newfoundland to those from outside, and when, in September 2001, terrorists crashed planes into the twin towers airspace around the US was closed.  Thirty-eight planes from around the world were diverted to Newfoundland, and suddenly thousands of people (and a pregnant monkey) were left stranded in the isolated town of Gander.

As might be expected, that community rose to the occasion and the play itself is similarly upbeat.  Song dance, alcohol, and individual acts of kindness are celebrated in the musical, which was penned by David Hein and Irene Sankoff.  Director Christopher Ashley gets the most from a sparkling ensemble cast, each of whom plays a number of roles – we are all the same when it comes down to it, wherever we are born.

It seems a little churlish to pick out individuals from the production, particularly when churlishness is a characteristic distinctly absent from the good people of Gander.  But, hey, I’m not from there so Kendra Kessebaum as a rookie TV reporter and Joel Hatch as the local mayor are especially strong.  As are the couple who play the two Kevins, Chad Kimball, and Caesar Samayoa.  Despite this, audiences will have their own favorites among the many characters, and there are no weaknesses among the cast.

The music is upbeat, folksy and foot tapping.  If the odd lyric is obscured beneath the beat, not too much is lost, and the overall chirpiness of the sound is more important in the context of the play.

‘Come from Away’ is unlikely to become a classic; it lacks the scale of a ‘Les Misérables’, the musical complexity and subtlety of a ‘Sweeney Todd’ or the all-encompassing import of a ‘Miss Saigon’ or ‘Sound of Music’.  But that is not a problem.  If everything we see is a classic in the making, a large scale all-singing, all-dancing extravaganza, we can lose our sense of perspective.

This is a tale of little stories highlighting small acts of kindness, and they are told with energy, empathy, and no little wit.  We might not get to know any of the numerous characters terribly well, but what we do experience is the best of humanity, encompassed in the acts of a tiny community unexpectedly required to get its hands dirty, while the leaders of the world deal with matters of greater importance.  George W Bush might be the face of the nation, but the really important work is done by the unknowns.  The surgeon might do the cutting, but it is the nurses who keep the patient alive.

The juxtaposition of ideas is at times riotously funny. ‘Thank you for shopping at Wal-Mart’ says an assistant to a stranded passenger ‘And would you like to come back to my house for a shower?’  Customer service beyond the call.

Getting There and Getting In

The thousand-plus seater Schoenfeld Theater, which hosts ‘Come from Away’, is located in Midtown Manhattan at 236 West 45th Street.  Performances are on Tuesdays and Thursdays at 7.00 pm, Wednesdays, Fridays, and Saturdays at 8.00 pm.  Matinees are on Wednesdays and Saturdays at 2.00 pm and Sundays at 3.00 pm.  A pretty good view and experience is to be had from any seat for this particular show.

Beware, the play is selling out at many performances so get your tickets well in advance.  Broadway.com. seats start at $79 if you can find them, with the Mezzanine coming in from $117.00 and the Orchestra at $187. 00.  Premium seats will set back theater-goers from $227.00.  Seatgeek has tickets available, with prices varying depending on demand for the particular performance.  Typically, prices fall between $113 and $360 for last-minute seats.  Stubhub similarly offers a variety of prices, from $140 to upwards of $700 where the demand is highest.  Those prices are down to demand the production, and such heavy interest offers the best review of the production possible.

Gander got on and did a brilliant job when it was needed most – something true of the endless acts of self-sacrifice and kindness humankind offers when the pressure is greatest.  As for that incident on the bus so many years ago, looking back I did do something – which was to move away and tell the driver, who shrugged his shoulders and pulled up at the next stop.  There, the fourteen-year-old got off, shaken but otherwise unharmed.  I phoned his school the next day, to report the incident, and their reaction suggested he was a bit of a lad (I’d need the name tag on his tie as it flapped around on me) but maybe I, the others on the bus (who displayed a sudden, unexpected interest in the road ahead) and the driver could have done more.  Had we come from the small Newfoundland town of Gander, perhaps we would.