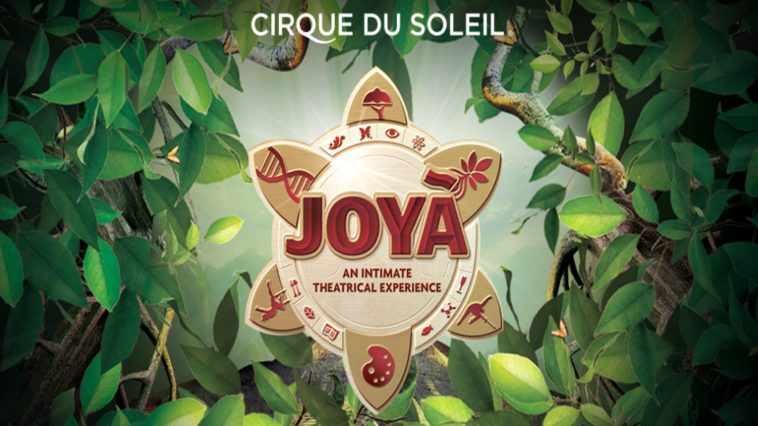 JOYÁ is the first-ever resident Cirque show in Mexico.

It’s a show that combines performing and culinary arts focusing on engaging all five of the human senses for the ultimate experience. The entire show pulls from Mexico’s history, and the story involved an alchemist and his granddaughter attempting to discover the secrets of life.

This Cirque show is particularly unique because it offers dinner as well. It runs for 75 minutes, with an extra hour spent on dinner. It’s the 36th Cirque production and the very first permanent show in Latin America. It features everything from ninjas to dinosaurs to pirates – a child’s dream. While most of the Cirque’s shows are appropriate for all ages, this is one Cirque show that can directly appeal to them.

It’s interesting because the show is a lot more casual than most – it’s not the typical show you’d expect from the Cirque, but they pull it off well. The laid-back atmosphere is a big reason for JOYÁ being one of Cirque’s most unique shows. A majority of these shows take place on massive stages in places like Las Vegas or Orlando. The smaller stage at the Riviera Maya suits the focused content perfectly, allowing children and families to not feel as overwhelmed as the other Cirque shows.

Of course, a smaller stage means less intense stunts, but this isn’t inherently a bad thing. The intimacy is a big draw for JOYÁ. The Riviera Maya only seats 600 people anyways, and you can see the entire performance perfectly from just about any seat in the theater.

The performers are typical Cirque fare – musicians, acrobats, and air performers like usual. It’s important to note that the show is entirely in Spanish, – though it’s also relayed in English – even without understanding the language, you can still get the gist of what’s going on. The show’s music is Cuban influenced, and the combination of the food, music, and performances contribute to the show’s standout experience.

While I stated that the show has a lot of unique aspects, the actual acrobatics are the closest to traditional that Cirque shows have ever been, but they still have that special injection that makes the Cirque brand stand out from the rest. Trampoline acts, juggling, trapeze and more all make an appearance.

Some audiences have expressed complaints about the length of the show. It’s one of the shortest in the Cirque’s repertoire, running around 25 minutes less than usual. That’s not to mention that the performances don’t truly start until 15 minutes after dinner. Despite this, most reviews of the show rave about how fun the experience is, and how it’s worth the ticket price regardless. Some even say it’s a must-go for those visiting Riviera Maya. You can also use StubHub Mexico when searching for a ticket.

There are multiple packages available too. The VIP package is the ultimate show, with priority seating, unlimited champagne, and a full hour of pre-show entertainment. The next package includes the same without unlimited champagne. There there’s the premium seat package, a bit lower of a tier, and finally the show by itself without any food or drink.

Most of the Cirque shows have the death-defying performances to draw people in. JOYÁ does not. What draws people into this show is the culturally inspired music, costumes, food, and storytelling the Cirque has gotten so good at over their many years. It’s odd because tickets to this show are a bit more expensive than the average Cirque show, but that’s likely because of the extra food, limited seating, and premium location. The Riviera Maya stage is absolutely gorgeous. It’s even recommended for audiences to come early so they can shoot photos of it all.

Overall, it’s a show that most people may not be able to experience, so if it’s possible for you, you should make an effort to go see it. Even experienced Cirque goers praise JOYÁ for how remarkable it is. Tickets can be bought over at seatgeek.com