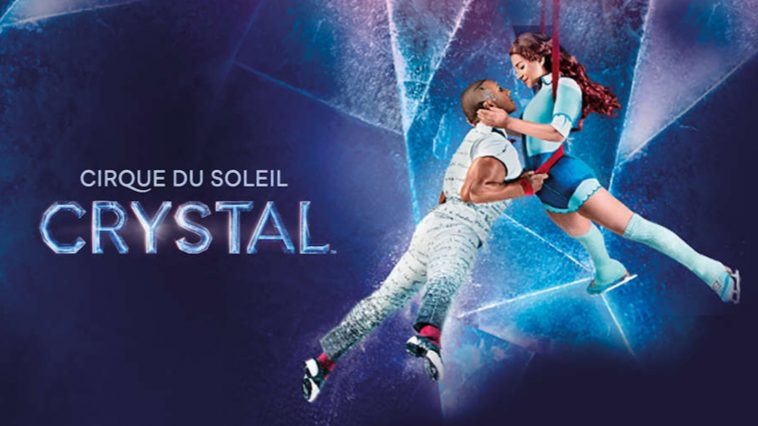 Of all the shows the Cirque du Soleil has in their repertoire, Crystal may be the biggest standout.

First off, it’s the Cirques first ever show on ice, featuring the acts standard world-class skaters and acrobats. It’s the 42nd production to come out of the Cirque since they came to be in 1984. The story focuses on Crystal, a girl on a path to finding herself – becoming the confident and empowered woman she knows she has the potential to be.

This is the first Cirque show to break from the traditional formula. There are new techniques, acts, and set design, unlike anything you’ve ever seen from the group. Synchronized skating – both freestyle and extreme – trapeze swinging, aerial traps, and more. Knowing the Cirque, these are going to be above and beyond any ice skating you’re used to seeing. These acrobats spend years perfecting these moves, risking their lives every time they perform for you.

There were no events found for Cirque du Soleil: Crystal.

Crystal contains 39 performers and 82 total crew coming along with them. The website describes these actors: “Watch world-class ice skaters and acrobats claim their new frozen playground with speed and fluidity as they challenge the laws of gravity with never-before-seen acrobatics.” It first showed in Florida to early viewers. It’s going on tour throughout the states, starting in St. Charles, Montana on November 4th and 5th. It consists of nine acts, starting with Crystal falling into a frozen pond and being transported to an entirely new world.

On her journey, Crystal will accomplish great feats like transforming a traditional park into a grand ballroom or a pond into a pinball machine. The creativity here is unmatched, and the Cirque should be incredibly proud of what they’ve accomplished. Crystal was created for arenas and arenas alone, showcasing just how epic this journey will be.

In a world pressuring us, this show is meant to inspire those of us who don’t want to. Those who can’t quite find their footing, but have the power to. It’s about taking a risk and not looking back, becoming who you truly are instead of conforming to societal norms. Not only is this told through the story, but also through the boundary-pushing acts and acrobatics.

U.S. tickets start range from 30-40 dollars, while Canadian tickets will be from 50-60 CAD. The tour will run until mid-2018, where the show will likely become a permanent piece at a home location like Orlando, New York, or Las Vegas.

It’s received a ridiculous amount of praise from those who’ve seen it, with some critics calling it the best original show the Cirque du Soleil has ever produced. For a group that takes years to come up with each show, that’s some truly high praise. Each Cirque show features original music and choreography. They take pride in being a synthesis of standard circus acts, yet standing against traditional practices.

The Cirque only takes the best of the best performers. Talent consists of Olympic-level skaters and gymnasts, top-level street performers, the most daring circus entertainers. Each show features truly death-defying acts, requiring these actors to put their lives on the line for your entertainment. They tend to last around 90 minutes and are incredibly thrilling experiences throughout their runtimes.

For how long they’ve been around, it’s amazing the Cirque can continue to outdo themselves. They have shows focusing on some of the most popular acts in the world, like The Beatles and Michael Jackson. They have some original programming that’s been in rotation for decades due to popularity, and ticket prices as low 30 dollars almost seem like a steal. Crystal is projected to pull in mass audiences, much like the rest of the Cirque’s collection of content. You’ll want to book your tickets as soon as possible and can do so by heading to seetgeek.com. You won’t regret it.