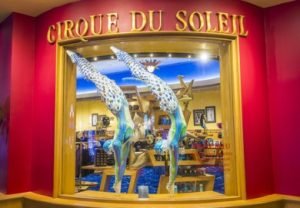 One of the largest theatrical shows in existence, The Cirque Du Soleil is hands down one of the most unique experiences theater fans can attend. The show was founded in 1984 in Quebec, Canada by two street performers, Guy Laliberté and Gilles Ste-Croix. It was initially funded by the Canada Council for the Arts, and has since grown into the show it’s known as today. Part of its success is due to its lack of traditional animals and the show-runner’s expertly-crafted blend of different circus shows throughout the world.

Each distinctive performance consists of live original music, special effects, and a story to tell. Shows contain fifty to one-hundred artists at a time, coming from all sorts of backgrounds – some from athletic ones, others from traditional circus acts, and even some street performers. While the main shows are in areas like Las Vegas, Orlando, and Riviera Maya, the Cirque tours the world every year with some of their most popular ones. The permanent performances – ones that stay in the main cities – bring in over 9,000 people a night, with over 90 million people have seen it worldwide since the Cirques conception.

It became profitable in the year 1990 and quickly expanded into the world from then onwards. The Cirque now has 19 shows in more than 270 cities, and they have a presence on every continent except Antarctica. The shows bring in an estimated $810 million in annual revenue and create jobs for over 4000 people worldwide.

At their headquarters in Montreal, nearly 400 creators from a variety of fields come together and design over 25,000 assets for these shows. While every contributor is essential, each show has a base team consisting of a creative director, writer-director, a choreographer, and then the set, lighting, and costume designers.

Some of the Great Shows Out There

Shows are broken into a 55-minute first act, a 30-minute interval, and a 50-minute second act, though permanent shows tend to be 90 minutes with no break. Both permanent and touring shows hover around ten a week, ensuring the performers are always in top shape and ready to perform at their best. Touring shows usually take around eight days to set up, with three days spent on clean-up. The Cirque tours under a “Grand Chapiteau” aka its massive tent. These tents weigh up to 11,524 pounds, standing 62 feet high and holding as many as 2,600 viewers. Usually, each show has its own tent colors and design. They include everything needed to support the team including a kitchen, a tent for focusing on art, and even a school.

Some of their shows are entirely original acts, while others are based on or inspired by some of the most popular acts in entertainment. “Love,” for example, is based on the classic rock band “The Beatles.” Another one, “CRISS ANGEL Believe” was a show for the famous magician. Some shows have been around for decades, while others only have a year or two run. It all depends on the audience’s reaction. The Cirque has a solid track record, with a majority of the shows have had respectable multiple-year runs. There are even some that can only be seen in the Las Vegas area. 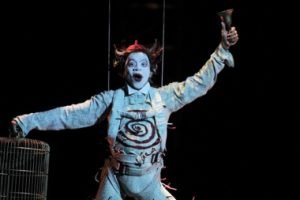 The recent craze is surrounding the Cirques newest show: Luzia. It’s a water-focused show, highlighting Mexican culture, and insect life. Not only is it incredibly gorgeous, but it’s a technical masterpiece. Luzia features a real 50-foot waterfall, onstage rain, and a wading pool. The engineers who figured out how to utilize 1,585 gallons of water for a performance deserve a raise. Not only must it be used, but the water also has to be filtered and disinfected as it’s recycled between performances. Then the stage has to be dried quickly afterward when acts require it. Equipment must receive protection, performers must adjust to being wet, and the water has to be kept at a reasonable temperature. The amount of work that goes into each show is admirable, and it’s no wonder they take an average of two years to create.

These performers genuinely believe in their work, putting their lives at risk for our entertainment. Since it’s inception, the Cirque Du Soleil has only had three fatalities. In 2009, a Russian acrobat fell from a swing while training and suffered fatal head injuries. In 2013, a French acrobat fell 90 feet into an open pit during a live Kà show. She died after sustained screams. Most recently, in 2016, a crew worker was killed by a lift while setting up for a “Luzia” performance. The higher-stakes result in a more thrilling experience for the audience.

Fans looking to learn more about the Cirque can purchase a variety of DVDs detailing its lifetime. There are documentaries, live recordings of shows, behind-the-scenes looks on production, and more. However, there’s nothing quite like the live show, and these are no replacement. If you’re interested in getting tickets, you’ll have to go through a few steps.

First, you’ll want to browse the website and find which shows are near you. With how many are out there, you’ll have to do some research. Then you’ll have to decide which seating you’d like and make sure you line up with the dates of your selected show. Once you’ve chosen a show, you can head to seatgeek.com to make your purchase.

The Cirque du Soleil is an outstanding value for any theater fan. It features a massive variety of shows catering to even the pickiest of tastes, it consistently tours around the world alongside main stage showings in popular travel destinations, and it contains some of the most talented and dedicated performers in the world. Life-risking acts, original music, and gorgeous special effects round off the thrilling experience, making any of their shows an absolute must-see.