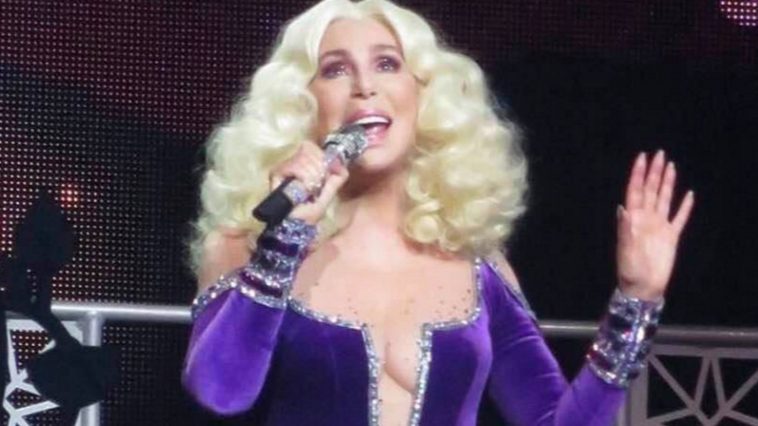 During an appearance on “The Ellen Show” in September, the music legend Cher has revealed she will hit the road in 2019, with the tour “Here We Go Again”. The 2019 tour, the first one in the U.S. in a five years span, will support the singer’s ABBA covers album – “Dancing Queen”, which was released on the 28th of September.

The “Here We Go Again” tour will kick off on the 17th of January 2019 with a show in Ft. Myers, Florida, will include stops in locations like Atlanta, Charlotte, Nashville, Chicago, Detroit, Philadelphia, Boston, New York and will wrap up on the 18th of May with a show in St. Paul, Minneapolis. Up to this point, Nile Rodgers & Chic have been announced to open the tour.

There were no events found for Cher.

Cher Tickets are available on many of the third party tickets sites.

Cher doesn’t seem to slow down, considering that her 2019 tour will be preceded by “The Cher Show” Broadway musical and by a series of shows in Las Vegas. This summer, Cher starred in the movie sequel “Mamma Mia! Here We Go Again” and it was there where she found inspiration to record a tribute album containing ABBA’s greatest hits. The producer of this album is Mark Taylor, who helped boost Cher’s career in the ‘90s with the “Believe” album. This time, his work with the musician resulted in an upbeat, updated, modern-sounding reinterpretation of ABBA’s songs, meant to encourage everybody to dance or to feel the intense emotion of the songs.

Cher’s choice to recreate some of ABBA’s songs in her own “no-compromise, always adjust yourself to change” kind of entertainment should not come as a surprise, taking into account that the two music legends have at least three things in common: they both had amazing musical and life experiences starting with the ‘70s, they both knew public “renaissance” in the last decades and, of course, they are both adored by millions of fans all over the world.

With all that in mind, listening to how Cher is singing these songs, you might get the feeling they should have been written for her in the first place. Yet, that doesn’t mean they keep any of Cher’s trademark from the ‘70s-‘80s decade. The songs absolutely belong to 2018 and you can “see” that by listening to the vibrating, perfect-for-a-night-in-the-club songs “Mamma Mia” or “Gimme! Gimme! Gimme! (A Man After Midnight)”. But Cher’s re-inventing skill is visible also in the emotional songs of the Swedish group: “One of Us” is turned from a mid-beat pop, “laying on a beach” song into a heart-breaking vocal performance accompanied solely by piano and strings. The Latino dancing flavor of “Chiquita” achieves the goal of uplifting the spirit of the song’s protagonist, while “Fernando” keeps the background flute, but brings an extra-beat to the song.

Whether you are a loyal ABBA fan or a Cher admirer, this album will reshape the impressions you have about both. And Cher will perform all this repertory live, in the 2019 tour “Here We Go Again”, so hurry up and get your tickets.

Born Cherilyn Sarkisian on the 20th of May 1946, in El Centro, California, Cher was raised by her mother Georgia, who was working as a model and actress. The contact she had with her mother’s line of work made Cher realize from a young age that she was attracted by entertainment and arts, which she included in her extracurricular activities. After leaving high school and moving to Hollywood, she met Salvatore “Sonny” Bono, with whom she got married in 1964. They became known as Sonny and Cher, working on an act and in 1965, they released the song “I Got You Babe”, which reached #1 in the charts. Cher gained popularity also as a solo artist, with “Bang Bang (My Baby Shot Me Down)” being her first single to enter Top 5. At the end of the ‘60s, the couple faced severe financial difficulties due to IRS unsettled debts and had to stop releasing songs. In exchange, they created a cabaret act and between 1971 and 1974 they had their own show, called “The Sonny and Cher Comedy Hour”. Cher solo’s career continued and in 1971 she had her first Number One – “Gypsies, Tramps and Thieves”, which spoke among other things about teen pregnancy.

In 1975, Cher’s marriage came to an end and for a while that prevented her from working as a performer, due to some provisions in the contract she had with Bono, so she started working as a model. Although she reached Top 10 again in 1979, her career booster came in 1987, when she released a self-titled album. Two years later, in 1989, she released the “shameless” music video for the single “If I Could Turn Back Time”. The music video was perceived as “shameless” because presented Cher on a military carrier, dressed in a sheer body stocking and a leather jacket, singing to a crowd of over-enthusiastic sailors. As a result, even the “daring” TV channel of those times – MTV – aired the video only during the night.

Cher reinvented again herself and her career in 1998 when she released the dance/electronic album “Believe”. The album sold in millions of copies, with the anthem “Strong Enough” dominating the dance floors and dance charts from all over the world. The new millennium saw Cher continuing to perform live, to release albums and to win various distinctions: in 2002, she included in the studio album “Living Proof” the single “(This Is) A Song for the Lonely” honoring the victims and the survivors of the 9/11 terrorist attacks, between 2002 and 2005 she performed a 325-dates farewell tour and in 2003 she won 3 Emmy Awards with one of the performances in that tour, aired by NBC. Her love for the stage transposed in a series of 192 shows she performed at “Caesars Palace” in Las Vegas between 2008 and 2011.

Two years later, in 2013, without showing any signs of artistic fatigue, the musician released the album “Closer to the Truth”. Last year, she returned to Las Vegas, this time at the “Monte Carlo Resort and Casino”, with “The Classic Cher” show and received “The Billboard Icon Award” after an explosive performance of the hits “If I Could Turn Back Time” and “Believe”. 2017 meant also her casting in the “Mamma Mia: Here We Go Again!” movie, which inspired her to release the “Dancing Queen” tribute album to ABBA and to prepare for the next year “Here We Go Again” live tour.

You can catch one of Cher’s amazing live performances on this tour by getting your tickets from StubHub.