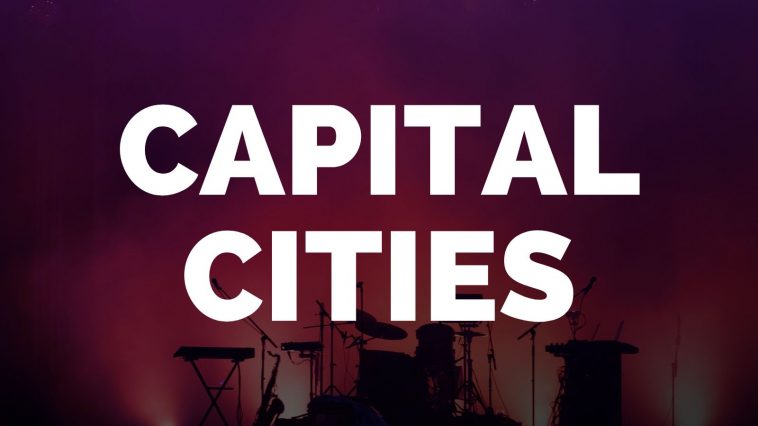 An electro-indie group with a penchant for funky beats and mercilessly catchy vocals, Capital Cities have continued to gain in popularity over the years as they have released new material and toured relentlessly. They mix synthesizers and horns like a master chef to create earworms that get you moving. Their energetic onstage presence has won over countless fans and they continue to sell out shows regularly. This is your chance to get some of the best Capital Cities tickets. You will want to see them in the best seats in the venue.

There were no events found for Capital Cities.

Originally a duo comprised of Los Angeles jingle-writers who met through Craigslist, Ryan Merchant and Sebu Simonian began to create music in earnest. After releasing some of their early material via their own label, they quickly signed with Capitol Records. The group scored a number hit on the alternative song chart with their single, “Safe and Sound.” The song went on to be used in a wide variety of commercials and continues to be a favorite at any Capital Cities concert.

Capital Cities tours have become known for their live shows. Ever since their early releases, they have built an ever more dedicated following. Capital Cities concerts have taken place in some of the most famed venues in the country, including Irving Plaza in New York City, the El Ray Theatre in Los Angeles, and the Fox Theater in Pomona, California. The band has also performed at such festivals as South by Southwest, Sundance, and ULTRA and has also toured with the likes of pop superstar Katy Perry.

When a song like “Safe and Sound” comes on, you can expect the crowd to ignite. The song remains hugely popular and regularly reduces audiences to a throbbing, singing mass of excitement. The song has been known to even bring the band out on the floor.  Other hits like “Kangaroo Court” and “Vowels” are regular crowd pleasers. They’ve also been known to collaborate, including on the song “Girl Friday,” in which rapper Rick Ross provided vocals.

A Capital Cities concert can be an interactive experience as well. The band has been known to help get the crowd involved during the song “Center Stage,” in which they teach the crowd a quirky line dance that they can perform. Other crowd favorites have included classic covers including “Nothing Compares 2 U” by Prince and Madonna’s “Holiday.” For all of the heavy production, Capital Cities concerts manage to faithfully recreate their computer-heavy tunes and turn them into a pulse-pounding, full-band experience. Even the timidest wallflower would have trouble keeping still at a Capital Cities show.

Any Capital Cities show is bound to be filled with throngs of dedicated fans. They know that the band is going to bring them a show filled with energy and a setlist full of their favorite tunes. As the band continues to grow in popularity, you will want to make sure that you act quickly when looking for Capital Cities tickets. Make getting the best seats a priority. This will make your event so much better than you know.