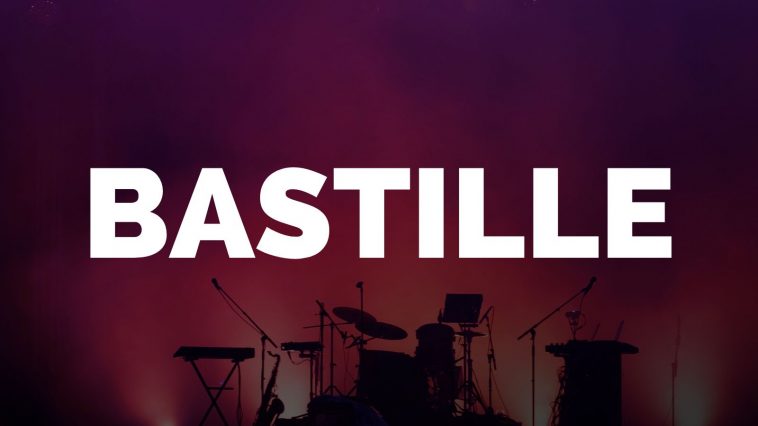 Bastille is a British alternative rock quartet featuring singer/songwriter Dan Smith, drummer Chris Wood, bassist/guitarist William Farquarson, and multi-instrumentalist Kyle Simmons. The band debuted in 2010 when founder and leader Smith released two tracks “Flaws” and “Icarus.” The presenter of the unsigned/independent artists radio show on Kerrang! Radio, Alex Baker, got his hands on a copy of the tracks and began playing them. Quickly, Bastille began accumulating a fanbase. They also continued to release songs online through YouTube and MySpace. After signing with Virgin Records in 2011, the group began performing at large English music festivals like Glastonbury and the Isle of Wight, and their career began to exponentially take off.

There were no events found for Bastille.

Bastille’s music is upbeat, cheerful, and adventurous, and their live concerts are subsequently joyous occasions. They tour all over the world and are a well-loved mainstream staple. While they continue to produce albums, they are more known for their standout singles. Many of their popular singles have been featured in television shows and video games.

After their successful introduction into the music world through the online medium, Bastille gained exposure through performing at major U.K. festivals. They performed at Glastonbury, the Isle of Wight, Redfest Reading and Leeds Festival, and Blissfields. Festival performances have remained a staple of Bastille tours. In 2012, they played a small headline tour alongside opening act Swiss Lips. In 2013, they were the opening act for Muse’s The 2nd Law Tour. Later in 2013, they earned their first-ever headlining slot at Blissfields. In 2016, Bastille went on a world tour to promote the release of Wild World, which reached number one on both U.K. and Scottish album charts.

When Bastille tours as a headliner, their shows regularly sell out. Additionally, when they tour, they usually tour all over Europe. They frequent festivals, primarily in England, but have played in North America at festivals like Coachella. Tickets to see Bastille live can be found by using the links above. Find the best deals on tickets to see your favorite artists perform live.

Bastille took its name from Bastille Day, July 14, which is Dan Smith’s birthday. Despite being a music-writing quartet nowadays, Dan Smith was the founder and mastermind of the group in the beginning. They built an early following through YouTube and MySpace and are one of the most successful acts to be built through social media.

They are unique in that they primarily produce hit singles rather than albums per-say. With a handful of full albums, they are well known for their songs “Overjoyed,” “Bad Blood,” “Flaws,” “Pompeii,” “Of the Night,” and “Happier.” Their songs have been used on a variety of television shows and video games including Hollyoaks, Made in Chelsea, The Vampire Diaries, Teen Wolf, and the FIFA video game series. Their joyous pop sound has earned them much accolade. In 2014 they were nominated for Best New Artist at the 57th Annual Grammy Awards, and they won the BRIT Award for Best Breakthrough Act. Bastille has also made a point to be involved with other musical artists. Their single, “Of the Night,” is a mash-up of the songs “The Rhythm of the Night” by Corona and “Rhythm is a Dancer” by Snap!. In 2018, they released a single alongside Marshmellow, “Happier.”

Bastille is a modern hit-making machine, and they have quite a future ahead of them. They continue to release smash single after smash single to the delight of music lovers. The group regularly tours, but they most often perform at music festivals. Find your tickets to a music festival nearest to you or by finding the best seats above in the listings.