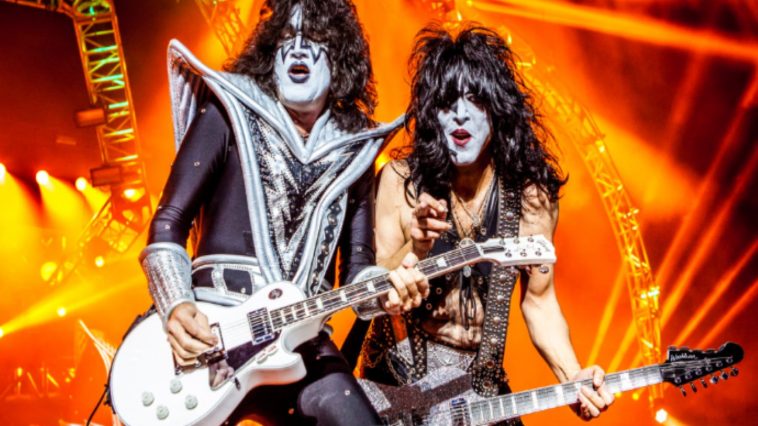 Kiss band, who has been touring since 1973, has announced it will hit the road in 2019 with its last tour. The band’s current members – Gene Simmons, Paul Stanley, Eric Singer, and Tommy Thayer will embark on a national US tour and then head to Europe. The rock veterans have announced their “One Last Kiss: End Of The Road World Tour” on the 19th of September 2018, after performing on the season finale of “America’s Got Talent”. The US tour will begin in Vancouver, on 31st of January 2019, will include stops in locations like San Diego, Dallas, Los Angeles, New Orleans, Detroit, New York, Atlanta and will wrap up (according to information released so far) on 13th of April 2019 with a show in Birmingham, Alabama.

The band’s members promise to offer fans the most exciting live experience ever: “it will be the most explosive, biggest shows we’ve ever done. People who love us, come to see us. If you’ve never seen us, this is the time. This will be the show”, said Simmons.

You can get tickets to see live this 45-years career band, which sold more than 100 million albums all over the world, from our favorite site.

At the beginning of the ‘70s, Paul Stanley and Gene Simmons decided to change their musical approach and thus replaced the band they had, called “Wicked Lester”, with a new project. They were joined on this project by drummer Peter Criss and by guitarist Ace Frehley. The new band, called “KISS”, after Stanley’s idea, got its inspiration from Alice Cooper and “New York Dolls”.

In 1973, Bill Aucoin, who had never managed a band before, accepted to be the boys’ manager and got them a record contract in just two weeks after joining them. The band started to design its own personality, with each member impersonating a character: Paul Stanley was “The Starchild”, Gene Simmons was “The Demon”, Peter Criss was “The Catman” and Ace Frehley was “The Spaceman”. Their stage guises attracted fans all over the US and their out-of-this-world appearances were doing wonders for their marketing. Each show meant they played various facets of their characters and offered crowds something they’ve never seen before: amazing pyrotechnic effects, face painting, space costumes, tough-guy vocals, platform shoes, lots of make-up, thunder-like riffs and party songs lyrics. They became larger-than-life superheroes that featured in comic books and lend their image to toys, lunch boxes, pinball machines, and board games.

Their massive commercial success came with the fourth album, released in 1975. Called “Alive!”, this double live album showed the image of an explosive rock group, with songs like “Deuce”, “Black Diamond” and “Strutter” becoming part of the band’s identity. “Rock And Roll All Nite”, initially released as a studio version on the 1975 album “Dressed To Kill”, made it to “Billboard Top 20” and shook fans all over the world. The following albums – “Destroyer” and “Rock And Roll Over” from 1976, as well as “Love Gun” from 1977 featured songs from the hard rock genre, that gathered even more fans in the band’s corner.

In 1978, the movie “Kiss Meets The Phantom Of The Park” was released and became a cult classic. Not afraid to take chances, each of the four members of the group released in 1979 solo albums and together they offered the public the pop-line inspired single “I Was Made For Lovin’ You”.

“Music From “The Elder” album, focused on heavy synth, was released in 1981 with not too much acclaim, while the 1982 “Creatures Of The Night”, centered on heavy-metal, was better received by critics and fans. The ‘80s meant several changes in the band’s line-up: in 1980, Peter Criss left and was replaced by Eric Carr, in 1982 Ace Frehley also left and was replaced by Vinnie Vincent. In 1983, Kiss showed again they were not afraid to take risks and appeared on MTV, for the first time since their early days without wearing their ”signature” make-up, to announce the release and correspondent tour for the band’s eleventh studio album. Thanks partially to the publicity that surrounded the band after this appearance, the album received a gold certification.

The ’80s meant also several best-selling albums, with the ballad “Forever”, released in 1991, as the peak of the heavy metal decade. In 1990, Eric Carr fell ill with cancer and died in 1991. The song  “God Gave Rock And Roll To You” from 1973 was re-worked into a master-piece as the band’s tribute to Carr. The song appeared in the urban classic movie “Bill & Ted’s Bogus Journey” (starring Keanu Reeves) and was included in its soundtrack. It took the band an entire year to replace Carr with Eric Singer and this new line-up released in 1992 the album “Revenge”. This was the first album since 1989 and it brought the band gold certification and presence in “Top Ten”.

In 1996, Simmons, Stanley, Frehley and Criss reunited and performed one of the most successful international tours of the year. They used again, in full, the two elements that defined their trademark: pyrotechnic effects and make-up. Two years later, in 1998, the band released “Psycho Circus” and went touring to support the album. The tour was a success, but the sales for the album did not reach the band’s estimation.

In 2001, Peter Criss left the band, allegedly unsatisfied with the salary he was receiving, and was replaced by the former band member Eric Singer. The same year, the band released a box-set that featured songs from all its career. Ace Frehley also left the band and was replaced by Tommy Thayer. After several years of touring without issuing new albums, in the spring of 2009, the band returned to the studio to release its first studio album in 11 years. The result was called “Sonic Boom”, was produced by Paul Stanley and Greg Collins and was sold in North America exclusively by Wal-Mart chain. The next memorable moment in the band’s history was 2014 when the group members were inducted as performers in the “Rock & Roll Hall of Fame”. The inductees were Gene Simmons, Peter Criss, Ace Frehley, and Paul Stanley. In 2017, the “Kissworld” best-of disc was released, supported by a tour with the same name.

Tireless, shameless (as some say), but always energetic, original, willing to shock and ready to offer fans exciting experiences, Kiss members leave a significant mark in the history of the music from the past 45 years. If you want to see this legendary band in the last live tour of its career, get your tickets from StubHub and use a good code.

Best Seats to KissHow to Get tickets to KissKiss Tickets Cheap